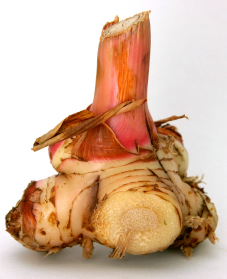 How to Use: Galangal Root

Herbalists consider the galangal root antispasmodic and antibacterial, and recommend its use in cases of dyspepsia and loss of appetite. 3

Preparation Methods & Dosage :The chopped root can be used in Asian cooking, May also be taken as a tea, extract or capsule.

In the Kitchen: Galangal root is used in many asian cuisines, and has a stimulating effect on the digestive system, much like ginger does. It is a very popular spice in all Southeast Asia and especially typical of the cuisine of Thailand. Fresh galangal has a pure and refreshing odor and an mildly spicy ginger-like flavor. The pungent aromatic oil of the galangal root is a flavoring additive for beverages.

Galangal Root Side Effects: Don't take both galangal and digestive enzymes together. 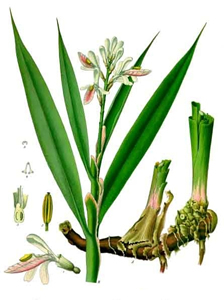 Ginger-scented rhizomatous perennial native to Asia and Australia, galangal is found in tropical rainforests in SE Asia. Lesser galangal(A. officinarum) is the most important species for food and medicine, greater galangal has less pungent rhizomes2