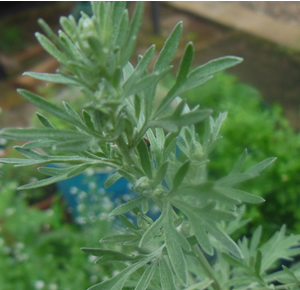 How to Use: Wormwood 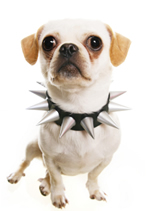 Wormwood is the classic dewormer,
but long term use can be toxic,
check with your vet

Wormwood is used today mainly as a bitter tonic, in fact "as bitter as Wormwood" is a very Ancient proverb, and is also mentioned in Biblical texts "her end was as bitter as wormwood." Proverbs 5:4

The azulenes in the plant are anti-inflammatory and reduce fevers, and the plant was used in ancient times as an emmenagogue, but is no longer used that way, and should be avoided in pregnancy. Small doses of wormwood tea taken before meals can stimulate digestion and prevent heartburn and gas, and even boost energy.

As the name implies, wormwood is a powerful worming agent that has been used for hundreds of years to expel tapeworms, threadworms, and especially roundworms from dogs, cats, and their humans. Although wormwood makes like miserable for parasites, it is not kind to the host. Wormwood is a common ingredient in many herbal "cleansing" formulations. If you suspect you or you child has been infested with worms, it really is best to seek medical help rather that rely on home cures. 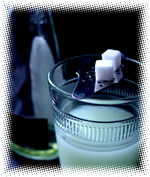 Wormwood is one of the major ingredients in absinthe, a fashionable drink in the nineteenth century became associated with the death of the American writer Edgar Allan Poe and the suicide of the painter Vincent Van Gogh. It was immortalized in a painting by Edgar Degas, which shows a haunting portrait of two absinthe drinkers, hollow-eyed and oblivious to all but the intoxicating beverage.1

Preparation Methods & Dosage :Wormwood tea is extremely bitter, wormwood can be infused in oil or vinegars for insect control, taken in capsules or extracts.

Wormwood Side Effects: Not for long term use, do not exceed recommended doses, excessive consumption could be toxic. Pregnant women should not take as it can cause uterine contractions. The FDA lists wormwood unsafe for internal use due to the toxicity of thujone oil which should never be used apart from the whole herb.

Wormwood should always be used in dried form for teas which contain little if any the volatile oil. The bitter principle in wormwood is largely nontoxic. (Weiss, Rudolf Fritz M.D.) 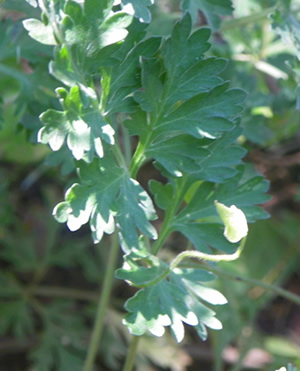 How to Grow Wormwood

Wormwood likes the shade and can be propagated by root division or cuttings. Sow seeds in the fall when ripe. Space plants about 2 feet apart, grows to heights of 4 feet when happily situated.

Chinese wormwood, Artemisia capillaris Native to Japan, Taiwan, and northern China.The practitioners of traditional Chinese medicine (TCM) who supply artemisia usually refer to this herb and the products made from it as yen chen hao.

Wormwood has been used in medicine from ancient times. Dioscorides and Pliny considered it to be a stomachic tonic, and anthelmintic. Boerhaave, Linnaeus, Haller, and all of the earlier writers speak of its good effects in many disorders. Absinthium is the Latin and pre-Linnaean for wormwood. In Biblical days it was a symbol of calamity and sorrow.


According to the Ancients, Wormwood counteracted the effects of poisoning by hemlock, toadstools and the biting of the sea dragon. The plant was of some importance among the Mexicans, who celebrated their great festival of the Goddess of Salt by a ceremonial dance of women, who wore on their heads garlands of Wormwood. The genus is named Artemisia from Artemis, the Greek name for Diana. In an early translation of the Herbarium of Apuleius we find: 'Of these worts that we name Artemisia, it is said that Diana did find them and delivered their powers and leechdom to Chiron the Centaur, who first from these Worts set forth a leechdom, and he named these worts from the name of Diana, Artemis, that is Artemisias. 2

This is a martial herb, and is governed by Mars. This is the strongest; the Sea Wormwood is the second in bitterness, and the Roman joins a great deal of aromatic flavour, with but a little bitterness: therefore, to acquire and enjoy the full powers they possess, they must be separately known and well distinguished, for each kind has its particularly virtues.
Nicholas Culpeper, 1653