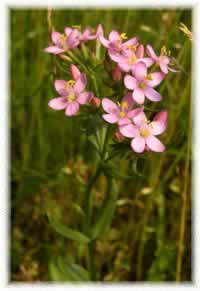 How to Use: Centaury

The use of Centaury is an ancient one dating back centuries to the Greeks and Romans. It is a bitter tonic closely related to gentian and is used for much the same purposes. Centaury was once considered a panacea, and freely given for almost any disorder from sick cows to head lice. The herb is still popular today as a bitter digestive tonic for gas, bloating, and heartburn. Research confirms the plant's potential for treating rheumatism and gout1. Centaury contains the alkaloid gentianine which has exhibited strongly anti-inflammatory properties.

Preparation Methods & Dosage :Usually taken as a tea or tincture before or after meals 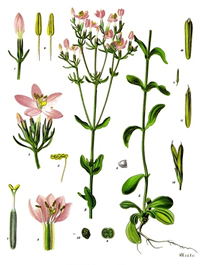 Koehler's Medicinal-Plants 1887
Of all the bitter appetising herbs which grow in our fields and hedgerows, and which serve as excellent simple tonics, the Centaruy, particularly its white flowered variety, belonging to the Gentian order of plants, is the most efficacious. It shares in an aboundant measure the restorative antiseptic virtues of the Field Gentian and the Buckbean. There are four wild varieties of the Centaury, square stemmed, and each bearing flat tufts of flowers which are more or less rose coloured. The ancients named this bitter plant the Gall of the Earth, and it is now known as Christ's Ladder, or Felwort. Though growing commonly in dry pastures, in woods, and on chalky cliffs, yet the Centaury cannot be reared in a garden. Of old its tribe was called Chironia, after Chiron, the Greek Centaur, well skilled in herbal physic.2


The name of the genus to which it is at present assigned, Erythraea, is derived from the Greek erythros (red), from the colour of the flowers. The genus was formerly called Chironia, from the Centaur Chiron, who was famous in Greek mythology for his skill in medicinal herbs, and is supposed to have cured himself with it from a wound he had accidentally received from an arrow poisoned with the blood of the hydra. 2