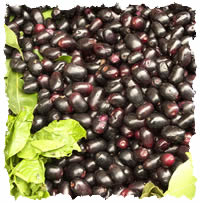 Ripe Jamun fruits at a market

How to Use: Jambul

The fruit and seeds of the Jambul tree have long been used in Eastern traditional medicine, and are gaining more interest here in the West for the treatment of diabetes. Practitioners of Ayurveda in India value jambul for lowering blood sugar and researchers are investigating its potential as a male contraceptive. Jambul is used in Unani and Chinese medicine for digestive ailments. The leaves and bark are used for controlling blood pressure and gingivitis. Wine and vinegar are also made from the fruit. It has a high source in vitamin A and vitamin C. 1,3

Jambul Side Effects: Monitor blood sugar levels carefully - do not change insulin dosage without the guidance of a physician. 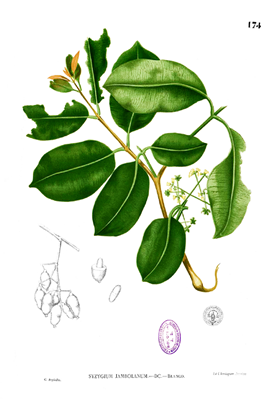 
According to Hindu tradition, Rama subsisted on the fruit in the forest for 15 years during his exile from Ayodhya. Because of this, many Hindus regard Jambul as a 'fruit of the gods,' especially in Gujarat, India, where it is known locally as jamboon. 3