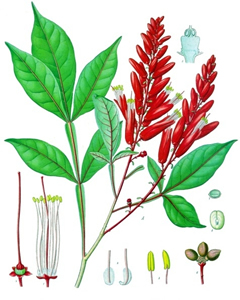 How to Use: Quassia

Quassia Bark extract is said to be many times more bitter than quinine, and can be used as a substitute in many medications that would normally contain quinine. Quassia Bark is used as as a febrifuge by the traditional healers of Brazil for malaria fevers. The bitter bark also acts as a digestive aid, an insecticide, and is used to treat liver and gallbladder problems.2

Quassia is becoming more well-known by herbalists in North America and is considered one of the best stomach bitters. It is especially useful for cases of lack of appetite such as anorexia nervosa and digestive sluggishness. 1

In the Kitchen: Quassia is used to flavor aperitifs and bitters which are added to cocktails.

Quassia Side Effects: Quassia should not be used during pregnancy. Quassia has been documented to have an antifertility effect in studies. Large amounts can cause nausea and vomiting.

Quassia is a small tree or shrub native to Brazil that is used for the bitterwood or quassia, its heartwood. The wood and leaves are extremely bitter, the name amargo means "bitter" in Spanish. The tree's resin contains quassin, a bitter-tasting substance (it is, in fact, the bitterest substance found in nature). Extracts of Q. amara bark containing quassinoids are used as insecticides, being particularly useful against aphids on crop plants. West Indians in particular use a water extract for an insecticide on their fields.