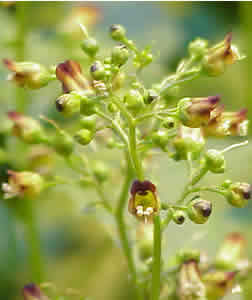 How to Use: Figwort

The name Scrophularia comes from scrofula, a form of tuberculosis that figwort was historically used to treat. Figwort is widespread in the Northern hemisphere, native species are found both in Europe, North America, (Scrophularia marilandica), and Asia that are very similar. Figwort was used by the practitioners of Eclectic medicine and the Doctrine of Signatures to treat diseases of the throat. The herb was and is still used in salves and poultices to soothe inflamed skin in cases of psoriasis and eczema, and to heal burns. 1 Herbalists today consider figwort as a cleansing herb that supports the detoxification of the body. 2

The use of S.ningpoensis in Chinese medicine dates back to the later Han dynasty (AD25-220)3 . In China it is taken with salt as a yin tonic.2

Figwort Side Effects: Not for use in pregnancy, or by those with a heart condition 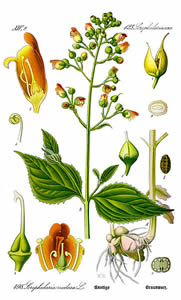 In France, S. nodosa is known as herbe du siege since the tubers were eaten by starving troops of during the siege of La Rochelle(1627-8). Scrophularia was an early remedy for scrofula,(tuberculosis of the neck). It was believed the disease could be cured by the touch of the king, and was called "Kings Evil". 3

Some Latin authors call it Cervicaria, because it is appropriated to the neck; and we Throat-wort, because it is appropriated to the throat. Venus owns the herb, and the Celestial Bull will not deny it; therefore a better remedy cannot be for the king's evil, because the Moon that rules the disease, is exalted there. The decoction of the herb taken inwardly, and the bruised herb applied outwardly, dissolves clotted and congealed blood within the body, coming by any wounds, bruise or fall; and is no less effectual for the king's evil, or any other knobs, kernel, bunches, or wens growing in the flesh wheresoever; and for the hćmorrhoids, or piles. An ointment made hereof may be used at all times when the fresh herb is not to be had. The distilled water of the whole plant, roots and all, is used for the same purposes, and dries up the superfluous, virulent moisture of hollow and corroding ulcers; it takes away all redness, spots, and freckles in the face, as also the scurf, and any foul deformity therein, and the leprosy likewise.
Nicholas Culpeper, 1653