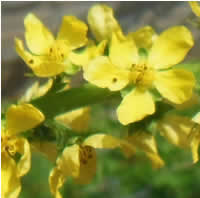 How to Use: Agrimony

Agrimony is most used in modern herbal practice as a mild astringent and a tonic. Agrimony is approved by the German Commission E internal use for mild, nonspecific, acute diarrhea and inflammation of oral and pharyngeal mucosa (sore throat). The dried, above-ground parts of Agrimonia eupatoria L. and/or A. procera can be used as a skin wash to treat skin inflammation and irritations.

Agrimony is most used in modern herbal practice as a mild astringent and a tonic. Agrimony's astringency is effective against diarrhea, especially in small children, and because of its low toxicity, the herb is particularly suitable for children's illnesses. (Hoffmann, David, 589) Agrimony stops irritation of the urinary tract that may increase a child's urge to urinate and, therefore, may be useful in the treatment of bladder leakage (cannot hold urine), bed-wetting and may help to control incontinence in adults as well. Sip a cup of Agrimony tea slowly before retiring to bed. (Dawson,Adele)

The tannins it contains tone the mucus membranes making it is useful for alleviating the symptoms of coughs and sore throats. Agrimony has had a great reputation for curing jaundice and other liver complaints..It was at one time included in the London Materia Medica as a vulnerary herb...Agrimony is also considered a very useful agent in skin eruptions and diseases of the blood, pimples, blotches, etc. The herbal tea can be used as a skin wash; it is thought to improve minor injuries and chronic skin conditions. (Grieve, Maud)

The combination of being a bitter tonic as well as an astringent herb make agrimony a valuable tonic for the digestive system and a useful remedy for healing peptic ulcers. The bitter principles in the plant support the function of the liver and gallbladder. (Weiss, Rudolf Fritz M.D.)

Preparation Methods & Dosage :Standard brew using 1 teaspoon of dried herb to each cup hot water. The longer you let it steep, the more tannins are extracted. Make a stronger decoction for external use in baths and skin washes Drink 2 to 3 cups per day. Used in ointment form for skin rashes, and as a gargle for sore throat.

In traditional Chinese medicine, agrimony is a major herb for stopping bleeding and it is used to treat profuse menstruation. Chinese research indicates that agrimony can increase coagulation of the blood by up to 50%. Cech, Richo

Agrimony Side Effects: Safe and non-toxic in moderate amounts. Note that while agrimony is an effective treatment for many forms of diarrhea, it can aggravate constipation. 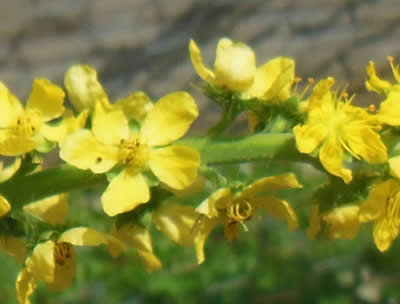 How to Grow Agrimony

Full sun, average soil, slow to germinate. Grows to 3 feet tall. Agrimony should be harvested shortly before or during summer flowering.

Agrimonia gryposepala: species native to North America commonly known as tall hairy agrimony was used by the Among the Iroquois people, Cherokee, The Ojibwe and other indegious peoples for much the same purposes of the common agrimony Agrimonia eupatoria which was naturalized from europe. Hemp Agrimony, Eupatorium Cannabinum (Linn.)and the Water Agrimony Eupatorium Aquaticum mas, have somewhat similar properties but are not botanically related.

The name Agrimony is from Argemone, a word given by the Greeks to plants which were healing to the eyes, the name Eupatoria refers to Mithridates Eupator, king of Pontus, who is remembered by early herbalists for fashioning a 'universal antidote' to protect him from all earthly poisons. Pliny described agrimony as "an herb of princely authorite" ..(Grieve, Maud)

It is moderately hot and moist, according to the nature of Jupiter. It is under Jupiter and the sign Cancer, and strengthens those parts under the planet or sign, and removes diseases in them by sympathy, and those under Saturn, Mars and Mercury by antipathy, if they happen in any part of the body, governed by Jupiter, or under the signs Cancer, Sagittarius or Pisces; and therefore must needs be good for the gout, either used outwardly in an oil or ointment, or inwardly in an electuary, or syrup, or concreted juice
Nicholas Culpeper, 1653