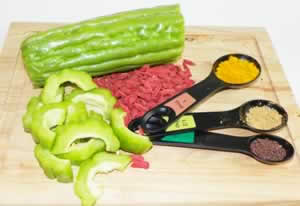 The ravages of diabetes effect on our health are well documented. The good news is that type II diabetes is the result of bad health and lifestyle decisions and can be turned around by making good ones. The bad news is it's easier said than done. Bad habits like drinking too much alcohol or eating too much sugar are both addictive and hard to overcome. Herbs can be great allies in this fight, even if you are not currently suffering from diabetes, almost everyone can benefit from using herbs to curb sugar intake and encourage home cooking of flavorful foods.

Baked goods are more diabetic friendly with spices like cinnamon and stevia which lessen the need for sugar. Some very interesting recent research suggests that cinnamon cassia (Cinnamomum aromaticum) is effective in improving blood glucose control in patients with type 2 diabetes. 3 Botanicals like bitter melon and fenugreek can be used along with modern medicinal therapy with managing diabetes, both as medicinal foods and supplements. Bitter melon improves the body's ability to use blood sugar and improves glucose tolerances. James Duke writes "One of the phytochemicals, charantin is said to be more potent than tolbutamide, and has fewer side effects, " and recommends eating one small melon a day.(Duke,James, Ph.D.) Burdock root may also play a useful role in helping to control blood sugar levels due to the inulin content of the root. In Europe, the fresh root is used for lowering blood sugar, its inulin content making it particularly suitable for diabetes. 2

If you are currently taking insulin or hypoglycemic drugs monitor your blood sugar levels closely and always confer with your doctor about any new herbal treatment.