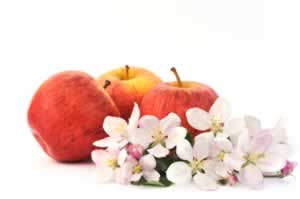 How to Use: Apple

“The man in the moon drinks claret
But he is a dull Jack a dandy
Would he know a sheeps head from a Carrot
He should learn to drink cider and brandy.”
Song of Mad Tom in Midsummer Night's Dream

The old folks really knew a good thing when they saw it. "An apple a day keeps the doctor away"; this humble fruit can help prevent two of the major lifestyle diseases of modern life, diabetes and heart disease. Apples contain malic and tartaric acids, and salts of potassium, sodium, magnesium, and iron. They also contain soluble fiber, which can lower cholesterol, help prevent plaque buildup in your arteries, and slow the uptake of glucose, helping you maintain healthy blood sugar levels. 3,4,5

Herbalists consider apples to be cleansing and tonic to the liver and kidneys. The best of the medicinal compounds are contained in the apple peel, so buy organic whenever possible and always wash thoroughly.5

Apple cider vinegar is such a useful and versatile substance, truly no household should be without it. You can't go wrong with something that is good to eat, prevents hair loss, softens skin, and cleans and disinfects the bathroom to boot. When it is made from whole, crushed apples vinegar contains all the nutrition of apples, with some added enzymes and amino acids formed by fermentation. 125 The mother of all home remedies for arthritis is 2 to 3 tablespoons of ACV mixed with honey every day. This simple remedy has so much anecdotal evidence of its benefit that I can think of no reason for anyone with arthritis not to try it. If nothing else cut down on calories by substituting a fresh vinaigrette salad dressing with herbs for the calorie laden, bottled kind to help increase weight loss. Vinegar is often touted for its alkalizing, effect as a balance to the many acid producing foods we tend to overeat, like meats and grains. There is some disagreement over whether vinegar, which is an acidic substance, makes the body more acidic, which acts to prevent food poisoning by killing harmful bacteria, 1 or whether it indeed has alkalizing, effect on the body. In any case, there is wide agreement that two or three tablespoons of vinegar as a daily tonic works to decrease inflammation, increase metabolism, and may help to alleviate the crippling pain of arthritis.3

Preparation Methods & Dosage :Eat organic apples! To help bulk up watery stools, bake an apple pie with the peel on, or make some homemade apple sauce. Vinegar is used to preserve herbs, and herbs add healthy properties and taste to the vinegar. Strive for two tablespoons of vinegar a day in your diet. Add vinegar to baths and hair rinses. You can use vinegar for most everyday cleaning tasks. It is naturally anti-fungal and leaves the bathroom, windows, and glass ware clean and shiny. The best way to clean fresh produce is a solution of one part vinegar to three parts cold water, which removes 98 percent of the bacteria. Combine vinegar with baking soda, add a few drops of antibacterial essential oils and you can clean just about anything. 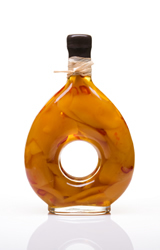 You can also buy vinegars infused with herbs and spices, but you can easily make your own infused vinegars at home using herbs, spices and fruits. It is a great way to preserve the best of the autumn harvest of herbs from your garden, and you end up with a much fresher, better product. Here are some easy and tasty recipes.

Apple Side Effects: Apple seeds are toxic - try not to eat them with your apple, and never consume more than one apples worth of seeds. 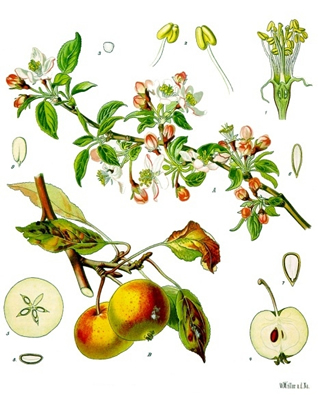 Vinegar was considered a medicine by the Egyptians, Romans and prescribed by Hippocrates (Greece) for internal and external protection against many diseases. Caesar's armies used vinegar as a beverage, Helen of Troy bathed in it to relax. During the First World War medics used vinegar to treat soldiers' wounds.

The word vinegar comes from the French word "vinaigre" which means "sour wine." When the wine was first made, natural sugars were fermented into alcohol. Over time, bacteria in the air transformed the alcohol into acetic acid, also known as ethanoic acid, which is the organic chemical compound best recognized for giving vinegar its sour taste and pungent smell.


Fruit trees came almost with the first Pilgrims and each small farm had its orchard. A Mr. Willaim Blaxton had an orchard at the foot of Beacon Hill in Boston as early as 1625. Apples were most popular for the making of cider, and apple cider is still an iconic beverage of Thanksgiving celebrations
The apple is featured in many love spells