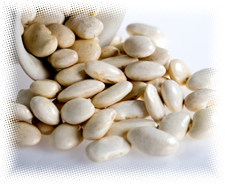 How to Use: White Kidney Bean

Spikes in blood sugar and increased insulin levels begins the progression to insulin insensitivity and type 2 diabetes. Common staples in the American diet, white bread, rice and potatoes consist of monosaccharides which are absorbed quickly in the intestine. These "high glycemic foods" can also be key factors in the development of cardiovascular disease and obesity. Many studies have shown that Phaseolus vulgaris, the common white bean is an inhibitor of alpha-amylase, an enzyme that promotes the breakdown of starch in the human gastrointestinal tract. Ingestion of this inhibitor helps prevent the breakdown of the carbohydrate in the intestine in foods so the less sugars are absorbed as fat cells for future use. Raspberries (Rubus idaeus ssp. idaeus) and strawberries (Fragaria spp.) contain anthocyanins which inhibit a-amylase activity and ellagitannins and have shown similar effects. The most amount of research along these lines has been done on white beans. 1

Preparation Methods & Dosage :Whole white beans are a great medicinal food, eat them often. Typical dosing for the capsule form is 1 to 2 capsules (500 mg per capsule), taken before each of 3 daily meals, for a total of 1500 to 3000 mg per day. 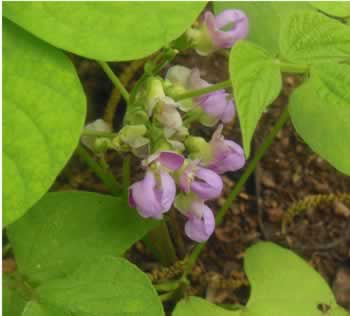 Bean flowers
The common bean, Phaseolus vulgaris, is an herbaceous annual plant domesticated independently in ancient Mesoamerica and the Andes, and now grown worldwide for its edible bean, popular both dry and as a green bean. The leaf is occasionally used as a leaf vegetable, and the straw is used for fodder. Botanically, the common bean is classified as a dicotyledon. Beans, squash and maize comprised the "Three sisters" that provided the foundation of Native American agriculture. As a legume, beans provided the nitrogen-fixing bacteria which supplied that essential nutrient to the other two crops. Wikipedia