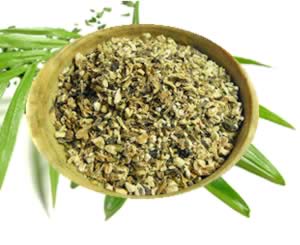 How to Use: Dandelion

Acne and skin care Like burdock, dandelion root helps the body dispose of unwanted skin bacteria. It also stimulates digestion and supports the liver - the major organ that helps rid the body of toxins and excess hormones, including the androgens that trigger acne breakouts. White, Linda B. M.D. As a specific herb for the liver, it also benefits the female reproductive system by helping to regulate and normalize hormone production. (Gladstar, Rosemary)

Dandelion root contains bitter principles that have a tonic effect on the liver and digestive system. It is gentle laxative and a natural diuretic that is rich in natural potassium, which enriches the body's supply. (Mabey, Richard, 52)This detoxifying, diuretic action also earns dandelion a place in many herbal weight loss formulations. In recent studies, Taraxacum officinalis was shown to have a positive effect on weight management. Dandelion root also contains sugars and starches easily assimilated by diabetics, and can be incorporated into a diet meant to help control blood sugar levels.(Weiss, Gaea and Shandor)

“Along with a bitter principle it contains substances that act like enzymes, stimulating the function of large glands above all the liver and kidneys. In addition these constituents stimulate cell metabolism as a whole, which is evident not only in the kidneys and liver but in other organic regions including the connective tissues. This may be responsible for the beneficial effect dandelion has on rheumatic conditions. ” (Weiss, Rudolf Fritz M.D.)

Dandelion is one of the most familiar spring cleansing herbs, a folk tradition that is deemed by many to be outdated. Yet when we take a closer look at the humble dandelion the scientific basis that validated this custom becomes clear. Like other spring herbs such as nettles, chickweed and salad burnet, dandelion is rich in vitamins and minerals.

Preparation Methods & Dosage : Dandelion Tea
Drink dandelion root tea to eliminate the toxins that cause skin breakouts and acne. A cup of dandelion tea in the morning to increase regularity. It is a natural diuretic, and gentle laxative that doesn't rob the body of potassium. Use 1 teaspoon of dried and chopped root to each cup of water. Bring to a boil over a low heat. Steep for 10 minutes

In the Kitchen: Young fresh dandelion leaves can be eaten in spring salads. Dandelion root makes an excellent vegetable coffee, and the flowers can be made into wine

The Chinese dandelion, Chin Hung ,Taraxacum mongolicum, is used by them as a specific for appendicitis, and has been used to treat infections, particularly mastitis.

Dandelion's main benefits are to the liver, it's bitter taste makes it effective in conditions of pitta such as eczema and acne. 2

Dandelion Side Effects: Always make sure the dandelion greens you are harvesting have never been sprayed with herbicide. If they have, don't try washing them, just move on to another patch. 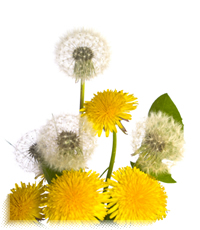 Dandelion is a member of the plant family Asteraceae and the tribe Cichorieae which includes twp other well known medicinal and food plants; lettuce and chicory. These plants all contain latex, a milky juice that can be expressed from the fresh stems, that finds many uses in herbal medicine. Dandelion and chicory form a complementary team in many herbal remedies.

All nations know the plant by some equivalent for the name dent de lion - lion's tooth, which the jagged edges of the leaves suggest. After flowering, it again looks like a bud, lowering its head to mature seed unobserved. Presently rising on a gradually lengthened scape to elevate it where there is no interruption for the passing breeze from surrounding rivals, the transformed head, now globular, white, airy, is even more exquisite, set as it is with scores of tiny parachutes ready to sail away. A child's breath puffing out the time of day, a vireo plucking at the fluffy ball for lining to put in its nest, the summer breeze, the scythe, rake, and mowing machines, sudden gusts of winds sweeping the country before thunderstorms - these are among the agents that set the flying vagabonds free. In the hay used for packing they travel to foreign lands in ships, and, once landed, readily adapt themselves to conditions as they find them. After soaking in the briny ocean for twenty-eight days - long enough for a current to carry them a thousand miles along the coast, they are still able to germinate.

How to Grow Dandelion

To cultivate your own organic supply of dandelion, plant seeds in a raised bed of loose soil, with additions of sawdust or fine wood chips to make the soil porous. Harvest roots in the second year. Chop the roots into small pieces and dry in a warm, airy place.

Whether the dandelion is a native American plant or a naturalized plant is debatable, it is found and eaten in many parts of the world. The Latin name for dandelion was dens leonis and the French name of dent de liaon evolved in English to the present dandelion.