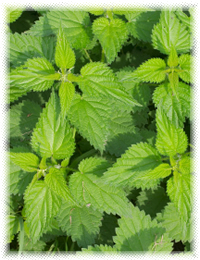 How to Use: Stinging Nettle

Stinging nettles are a potent herb with a long history of use. Nettle is one of natures best nutraceuticals, containing protein, calcium, phosphorus, iron, magnesium, beta-carotene, along with vitamins A,C, D, and B complex, all in a form that is easy for the body to use.

The stinging comes from the presence on the bristles of histamine that delivers a stinging burn when the hairs on the leaves and stems are touched. Stinging nettle contains natural antihistamines and anti-inflammatories (including quercetin), that open up constricted bronchial and nasal passages, helping to ease hay fever, and nose & sinus type allergy symptoms.1

Extracts of nettle roots are reliable diuretics that encourage excretion of uric acid, but simultaneously discourage nighttime bathroom urges, making this remarkable plant useful for such disparate problems as gout, and the overnight incontinence of benign prostate enlargement and weak and irritated bladder. Frequent use of nettle leaf tea, a cup or more daily, rapidly relieves and helps prevent water retention. Nettle is a superb nourisher of the kidneys and adrenals.

Stinging nettle is an almost ideal herb for those with all types of arthritis, rheumatoid arthritis, and gout. The anti-inflammatory substances combined with the rich concentration of the minerals boron, calcium and silicon ease the pain while helping to build strong bones. Drink stinging nettle in teas to reap the most benefits for osteoporosis and the bone loss that is often associated with arthritis. A cup of nettle herbal tea delivers as much calcium and boron, important herbs for bone health, as a whole cup of tincture would.3 While non-steroidal anti-inflammatory medication (NSAID) is necessary evil for most with arthritis, using nettle may help you to decrease the amount you need to take. In a scientific study of patients with acute arthritis, stewed stinging nettle leaves enhanced the anti-inflammatory effects of common arthritis medications. One reason may be that nettles contain large amounts of magnesium which helps to moderate pain response.

Stinging Nettles use a tonic of the female system goes back to the Native American women who used it throughout pregnancy and as a remedy to stop hemorrhaging during childbirth. It is considered one of the best all round women's tonics. Nettles are a good general tonic of the female reproductive system, excellent for young women just starting their monthly cycle, as well as women entering menopause. Stinging nettle helps to keep testosterone circulating freely and keep you feeling sexually vital, and has been shown effective in treatment of BPH in clinical trials when combined with saw palmetto 4 and for male pattern baldness when combines with saw palmetto and Pygeum 5 Stinging nettle also acts as a tonic to the female system making it a herb that couples can share.2

Preparation Methods & Dosage :If you grow nettles, or live in an area where they can be wildcrafted try the fresh young spring plants cooked until tender and seasoned with just a little butter. The leaves can be used raw and applied directly to the rheumatic pain area, they increase circulation and draw out pain. While most people avoid the stinging part of the nettle, those with arthritic hands deliberately prick there hands to calm inflammation and pain. Use the dried leaf in teas or sprinkled it onto food like parsley. Stinging nettle makes an almost iridescent emerald green tea that is very nutritious, mild and slightly grassy.

Stinging Nettle Side Effects: The sting of the nettle can cause a rash in some people. It is a strange fact that the juice of the nettle can provide relief for its own sting. It can also be relieved by rubbing leaves of rosemary, mint or sage. 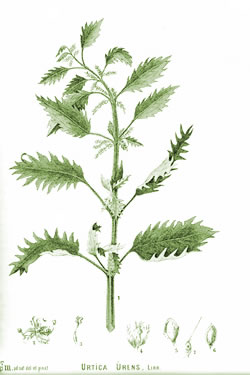 Millspaugh, Charles F.[99]
Nettles, despite their perfect adaptation to North America, are not native but where brought over from England by John Josselyn. This hardy plant can be seen on nature walks throughout temperate regions throughout the world and presents a pretty and delicate array of greenish-white flowers, and of course the bristles and hairs that put the 'sting' into stinging nettles.


In Hans Andersons fairy-tale of the Princess and the Eleven Swans, the coats she wove for them were made of nettles. Indeed nettle fibers, like hemp and flax have been used for textiles. A quaint old superstition exited that a fever could be dispelled by plucking a Nettle up by its roots, reciting thereby the names of the sick man and also the names of his family. Called "wergulu" in old Wessex in the tenth century, nettle was one of the nine sacred herbs, along with mugwort, plantain, watercress, chamomile, crab apple, chervil, and fennel.