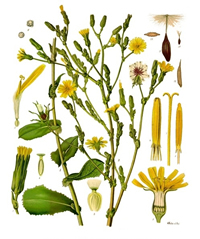 How to Use: Wild lettuce

Wild lettuce is a valuable remedy for insomnia and muscular arthritis. The common name "lettuce opium", as it was known in the earlier official pharmacopoeias, refers to the potent milky latex produced by the stems and leaves. There has been a recent internet driven surge of popularity of wild lettuce as a recreational herb, however wild lettuce will disappoint those only looking for a legal high similar to opium. The powers that be have outlawed all the truly narcotic herbs, leaving only the less potent ones available to use without fear of running afoul of the law. That said, this relaxing and sedative herb can be a ally for those needing help to induce sleep, and calm restlessness and anxiety. 1,2

Preparation Methods & Dosage :When a stem or leaf from a wild Lettuce plant is broken or cut, it will bleed a thick milky sap. This sap can be made into an alcohol tincture, (Lactucarium) or the fresh leaves and flowering tops can be tinctured, or dried and made taken as teas,smoked or less often in capsule form.

Few gardeners allow the table lettuce (saliva) to go to seed; but as it is next of kin to this common wayside weed, it bears a strong likeness to it in the loose, narrow panicles of cream-colored flowers, followed by more charming, bright, white little pompoms. When the milky juice has been thickened (lactucarium), it is sometimes used as a substitute for opium by regular practitioners - a fluid employed by the plants themselves, it is thought, to discourage creatures from feasting at their expense. Certain caterpillars, however, eat the leaves readily; but offer lettuce or poppy foliage to grazing cattle, and they will go without food rather than touch it.

Where the garden varieties originated, or what they were, nobody knows. Herodotus says lettuce was eaten as a salad in 550 B.C.; in Pliny's time it was cultivated, and even blanched, so as to be had at all seasons of the year by the Romans. Among the privy-purse expenses of Henry VIII is a reward to a certain gardener for bringing "lettuze" and cherries to Hampton Court.

Netje Blanchan Wild Flowers worth Knowing(1917)
Pagans use wild lettuce as an incense aid for divination, especially when working with darker deities.

It is under the government of Mars. The smell and taste is much like opium. A syrup made from a strong infusion of it, is an excellent anodyne(pain relief) it eases the most violent pains of the colic, and other disorders, and gently disposes the patient to sleep, for it has none of the violent effects of other opiates. The best way of giving it is, to dry the juice which runs from the roots by incision ; this dissolves freely in mountain wine, if one ounce be put into a gallon of wine there is produced an excellent quieting medicine, a teaspoonful of which in a dose in a glass of water. This takes off spasms, convulsions, stays fluxes of all kinds proceeding from irritation.
Nicholas Culpeper, 1653