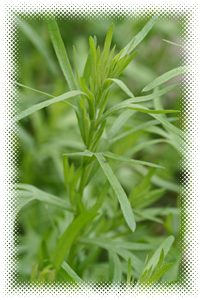 How to Use: Tarragon

Tarragon has never been highly valued as a medicinal herb but it makes up for it by being a star in the kitchen. John Evelyn said "'Tis highly cordial and friendly to the head, heart, and liver." 1, which is as good a recommendation as any. The leaves contain an essential oil very similar in composition to anise that contributes to much of the herbs flavor, and is mostly lost in the drying of the herb. The best way to enjoy the subtle and tasty benefits of tarragon is to have it growing close at hand.

In the Kitchen: Makes an excellent vinegar, gives a spicy,sweet flavor to fish, eggs, cheese and sauces. In French cuisine, it is an integral part of fines herbes and dijon mustard.

Tarragon Side Effects: None noted

How to Grow Tarragon

Allow mature plants to dry out between waterings. Likes well drained soil in full sun. Pick leaves as needed, harvest the entire plant in the fall when the bottom leaves turn yellow. It is one of the few herbs that is not known to set seed, and propagation is by cuttings and root division. Topdress the garden beds to protect from frost during the winter. Bring a cutting indoors to have fresh leaves for use, dry tarragon loses much of it's flavor.

The English word "tarragon" originates from the French word estragon or "little dragon," which is derived from the Arabic tarkhun. Some believe the herb was given this name because of its supposed ability to cure the bites of venomous reptiles, while others believe the plant was so named because of its coiled, serpent-like roots. 2

The leaves, which are chiefly used, are heating and drying, and good for those who have the flux, or any preternatural discharge. It is a mild martial plant. An infusion of the young tops increases the urinary discharge, and gently promotes the menses
Nicholas Culpeper, 1653