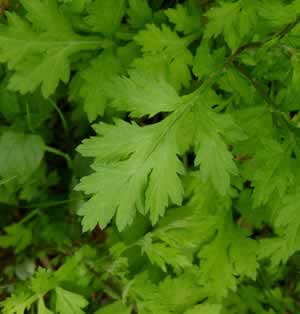 How to Use: Mugwort

Sometimes overlooked for more "flashy" herbs in this current day, mugwort is still a favorite of wise women. Mugwort has an affinity for the female reproductive system and is used as a uterine stimulant that can bring on delayed menstruation and help restore a woman's natural monthly cycle. 1

As all the bitter herbs, mugwort is an excellent digestive stimulant and is quite effective taken before or after heavy meals to alleviate gas and bloating.

One of the more interesting traditional uses of mugwort is that of a dream herb. It is often used as one of the main ingredients in sleep pillows, and it said to bring the dreamer more lucid dreams. Mugwort is also often used as a smudging (burning) ceremonial herb. It is mildly sedative and useful in calming frayed nerves and easing stress. A combination of agrimony, mugwort and vinegar is an excellent treatment for sciatica or muscular stiffness. 2

Preparation Methods & Dosage :Mugwort can be taken in teas, or tinctures. Often mixed with lemon balm or other sweeter herbs.

Burning mugwort in moxibustion heat therapy is one of the oldest forms of Chinese traditional medicine and is used to stimulate the flow of qi and maintain general health. It especially dispels cold and dampness.

Mugwort Side Effects: Nontoxic, but as with all herbs with emmenagogic properties, avoid in early pregnancy. Not for long term use. Avoid large doses. 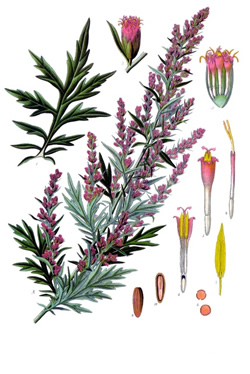 Mugwort is a member of the powerful Artemis family of herbs and is used widely both in western and eastern herbal traditions. It was used in medieval times to flavor beer and keep the user safe from evil possession.

Mugwort is a member of the powerful Artemis family of herbs and is used widely both in western and eastern herbal traditions. It was used in medieval times to flavor beer and keep the user safe from evil possession. In North America, the use of mugwort dates back to the seventeenth century. Women of the Cheyenne tribe used "woman's" mugwort, Artemisia frigida , known commonly as prairie sagewort, to regulate their fertility. Women of other tribes, the Blackfoot and Arapaho, used it to stimulate missed menstruation as well. 3


In the Middle Ages, the plant was known as Cingulum Sancti Johnnis, it being believed that John the Baptist wore a girdle of it in the wilderness. It was believed to preserve the wayfarer from fatigue, sunstroke, wild beasts and evil spirits generally. A crown made from its sprays was worn on St. Johns Eve to gain security from evil possession.

Mugwort is almost always included in the nine sacred herbs of the summer solstice, and plays an important role in as an incense for the blessing of shamans before entering the flight of the soul. 3