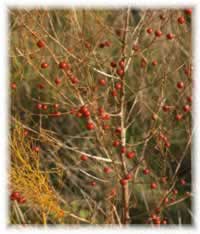 How to Use: Asparagus

There are over 300 species in the asparagus family, many are used medicinally, grown as ornaments or eaten as vegetables. The most well-known species, Asparagus officinalis, is what we commonly refer to as asparagus, whose tasty green stalks are one the most nutritious of the early green vegetables in the spring garden. Like tomatoes, it is high is lycopene, a powerful antioxidant that is protective against many degenerative diseases and cancers. The viamin A content is important for eye health and the fibrous stalks help to reduce cholesterol. Asparagus is also a useful diuretic and mild laxative.

Asparagus racemosus is the species used in India for medicinal purposes.

Preparation Methods & Dosage :The powdered root is made into teas and tinctures. The fresh shoots are a healthy spring vegetable.

Known in India as Shatavari, asparagus has been a treatment for infertility and lack of libido in women for thousands of years, and is regarded as one of the most important herbal tonics for women.

Asparagus Side Effects: Consult with a physician before using if pregnant or nursing 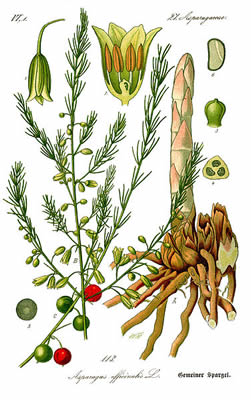 It appears to have been cultivated in the time of Cato the Elder, 200 years B.C., and Pliny mentions a species that grew near Ravenna, of which three heads would weigh a pound. Asparagus is noticed by Gerard in 1597, and in 1670 forced Asparagus was supplied to the London market.. 2

The name Shatavari, referring to the species used in Ayurvedic medicine is Asparagus racemosus, is from an Indian word meaning "a woman who has a hundred husbands".