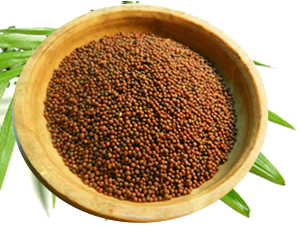 How to Use: Mustard

About: Mustard is warming and stimulating to the digestive system. It makes food taste better, and helps you to digest your food as well. The pungent taste and aroma of mustard might be best known here in North America for its iconic pairing with hot dogs and summer barbecues, however, the ancient Greeks had a better understanding its true medicinal value and attributed its discovery to Asclepius, demigod of medicine and healing. 59

Mustard seeds contain mustard oil, the pungent, eye-watering volatile oil that is very stimulating to circulation throughout the body and to the lungs. This antibacterial oil opens breathing and helps to kill germs while it clears congestion in the airways.

Preparation Methods & Dosage : Mustard can be applied in external plasters and poultices to clear chest congestion and ease achy joints. Mustard seed foot baths are a wonderful way to treat stubborn colds, sudden chills, and poor circulation. And of course, mustard seed can be made into mustard, the condiment we are so familiar with.

Mustard Side Effects: Overuse may blister the skin. Do not use it if your thyroid function is low or if taking thyroxine. 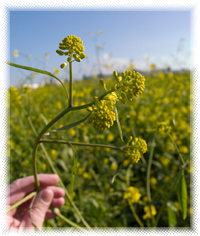 mustard seed flowers in a field

Now, there are two species which furnish the most powerfully pungent condiment known to commerce; but the tiny dark brown seeds of the Black Mustard are sharper than the serpent's tooth, whereas the pale brown seeds of the White Mustard, often mixed with them, are far more mild. The latter (Brassica alba) is a similar, but more hairy, plant, with slightly larger yellow flowers.

How to Grow Mustard

Brassica juncea is the species of mustard grown as "mustard greens", and is known more for its culinary uses, while the much more pungent B. nigra is grown for the medicinal properties of its seed. Mustard greens can be sown directly in the garden as a cool weather crop in southern gardens, harvest the tender young leaves for salad greens before flowering. Mustard greens contain large amounts of beta carotene, iron and calcium and vitamin C. A very nutritious addition to your diet, especially for those whose diet is lacking in calcium, mustard greens may have even have cancer preventative properties. 108


The kingdom of heaven is like unto a grain of mustard seed, which a man took and sowed in his field: which indeed is less than all seeds, but when it is grown, it is greater than the herbs, and becometh a tree, so that the birds of the air come and lodge in the branches thereof. Biblical parable

It is an excellent sauce for such whose blood wants clarifying, and for weak stomachs, being an herb of Mars, but naught for choleric people, though as good for such as are aged, or troubled with cold diseases. Aries claims something to do with it, therefore it strengthens the heart, and resists poison. Let such whose stomachs are so weak they cannot digest their meat, or appetite it, take of Mustard-seed a dram, Cinnamon as much, and having beaten them to powder, and half as much Mastich in powder, and with gum Arabic dissolved in rose-water, make it up into troches, of which they may take one of about half a dram weight an hour or two before meals; let old men and women make much of this medicine, and they will either give me thanks, or shew manifest ingratitude. Mustard seed hath the virtue of heat, discussing, ratifying, and drawing out splinters of bones, and other things of the flesh.
Nicholas Culpeper, 1653