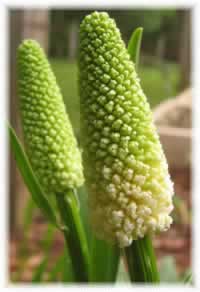 How to Use: False Unicorn

A treasured woman's botanical, false unicorn's gently curved root, which resembles a unicorn's horn, may be the source of its most common name. Used by Native American women to deter miscarriage, it is still widely used to treat a variety of problems unique to the female reproductive system. The root contains steroidal saponins which are precursors of estrogen. Steroidal saponin-containing herbs may normalize the luteal phase in women, making them useful for infertility which is associated with failure to ovulate.

Preparation Methods & Dosage :One-half to 1 teaspoon of liquid extract, or 1 to 2 grams of the root in a tea, up to 3 cups per day, 1 teaspoon of root tincture, 3 times per day.

False Unicorn Side Effects: May cause nausea or vomiting in large doses. Consult a qualified herbalist or naturopath if you are pregnant.

How to Grow False Unicorn

False Unicorn Root - - Chamaelirium luteum is on the United Plant Savers "At Risk" list. Wildcraft this plant responsibly and consider growing it if you have suitable garden space. Plant pefers moist, shady, forest like conditions.


American settlers of the 18th and 19th century learned of its use from the native american tribes who used it to prevent miscarriage. Listed in the U.S. National Formulary from 1916-47
The long trailing roots of False Unicorn root, so the legend goes, possessed not only extremely beneficial healing properties, but extraordinary magic. This so angered the Devil, that he bit off all the roots, his rage so powerful that to this day the roots have not been able to grow back. But the remaining stub is still imbued with good medicine, and every spring it is able to put forth the tall spike of beautiful blazing-star blossoms as a reminder that the power of goodness can always avert the forces of evil.