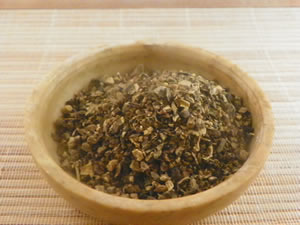 How to Use: Black Cohosh

Black cohosh contains numerous chemical constituents, among them isoflavones which mimic hormonal activity. This makes this herb useful for hot flashes, vaginal dryness, and even the depression sometimes associated with menopause. Though black and blue cohosh are unrelated botanically they are often used together in formulas to support the female reproductive system. Blue cohosh acts primarily as a uterine stimulant, while black cohosh effects estrogen levels. (Gladstar, Rosemary) It appears to provide that relief without having adverse estrogenic effects on mammary gland or uterine tissue. ABC

Black cohosh is mainly known as a woman's botanical but has some additional uses according to older herbalists who praised it as a calming cough remedy. (Grieve, Maud) ,(Millspaugh, Charles F. 37[11-2]) , who studies its use amoung the American Indians in the late 1880's. Add the tincture to your cough remedy, or drink black cohosh tea to quiet a nighttime cough.

In addition to its estrogenic properties, black cohosh has pain relieving and anti-inflammatory actions that makes it useful for arthritis. Rheumatoid arthritis is a common affliction among women, and can be aggravated by the hormonal imbalances during menopause. Emerging research suggests the estrogen levels may be implicated in many conditions such as rheumatoid arthritis and heart disease, though the relationship is still unclear. More study may determine a broader range of benefits for black cohosh than previously thought.

Preparation Methods & Dosage :Black cohosh can be brewed to make a bitter, dark tea that has a wide range of benefits. Also taken in capsule and extract form.

Black Cohosh Side Effects: Some people report an upset stomach or other gastric complaints. Prolonged use (longer than 6 months) could cause side effects. Not for use while pregnant or nursing. 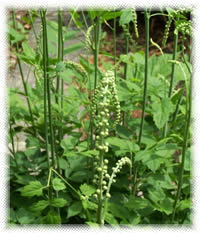 How to Grow Black Cohosh

Actaea racemosa (Cimicifuga) is on the United Plant Savers "At Risk" list. Wildcraft this plant responsibly and consider growing it if you have suitable garden space. Edge of forest or shade garden.

During the mid-1800s, physicians prescribed black cohosh for arthritis, insomnia, menstrual cramps, and symptoms of influenza. Black cohosh was a favorite remedy among all tribes of the aborigines, (American Indians) being largely used by them in rheumatism, disorders of menstruation, and slow parturition. It was also used as a remedy against the bites of venomous snakes, with what success history does not relate, but we can easily judge. (Millspaugh, Charles F. 37[11-2])