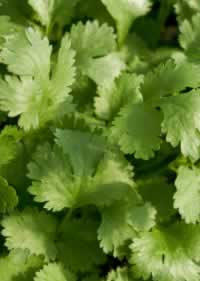 How to Use: Cilantro

Cilantro (leaves)and Coriander (seeds) and are names for different parts of the same plant, Coriandrum sativum, a naturally healing food in both forms. Cilantro is an excellent culinary herb that adds flavor to foods and improvse digestion. There are both scientific studies, and anecdotal evidence to support cilantro's reputation as a powerful depurative.. The herb may also have a protective effect when cooked and eaten with fish and other foods that may be contaminated with heavy metals.

Preparation Methods & Dosage :The leaves of young cilantro plants, which resemble flat-leaved parsley, are staples in Mexican, Chinese and Thai cooking, as are the roots.

In the Kitchen: The leaves of young cilantro plants, which resemble flat-leaved parsley, and distinguished by their distinctive, strong aroma, are staples in Mexican, Chinese and Thai cooking. Consider using cilantro especially when eating foods like fish, likely to contain mercury and other heavy metals as it could be protective as well as tasty. 7

The seeds of coriander are considered warming and good for kapha dosha. Cilantro, the leaf has a cooling energy

Cilantro Side Effects: None noted 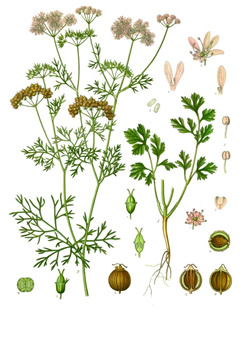 How to Grow Cilantro

Sow directly in full sun after all danger of frost is past. Harvest seeds in late summer by cutting seed heads when ripe. Dry and store in glass jars.

Coriander has been used by man since the dawn of history; the seeds have been found at neolithic archeological sites and in the tomb of the Egyptian pharaoh Tutankhamun. Cilantro is mentioned in papyrus scrolls and once grew in the famous hanging gardens of Babylon. The Hebrews used cilantro with other herbs in passover rituals. Hippocrates cultivated and used the herb in his practice in ancient Greece. Cilantro made the voyage to the new world around 1670 and was planted in Massachusetts.