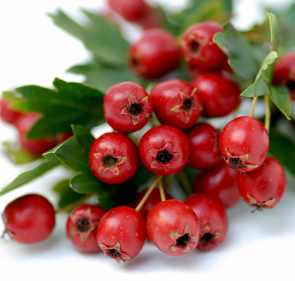 How to Use: Hawthorn

Hawthorn berries have been used as a heart tonics for thousands of years, the hawthorn tree was considered to be sacred in medieval times, most likely stemming from a tradition that it furnished the Crown of Thorns. A great deal of scientific study has validated hawthorn's benefits to the cardiovascular system, and the German Commisson E has approved hawthorn for use in cardiac insufficiency. This traditional European herb dilates coronary arteries, improves oxygenation and energy metabolism in the heart, and decreases lactic acid, the waste product of exertion that causes heart muscle pain. Hawthorn improves the heart muscle's metabolism, improving pumping capacity and making the heart's job easier by relaxing the blood vessels. Hawthorn berries are used in combination with motherwort to promote longevity and strengthen the heart.

In addition to being one of the most effective and safe heart tonics, hawthorn is also valuable in insomnia and as a digestive aid. Both flowers and fruit and berries are astringent and useful in decoction to cure sore throats.

Hawthorn Side Effects: Hawthorn is safe, and can be considered a medicinal food. 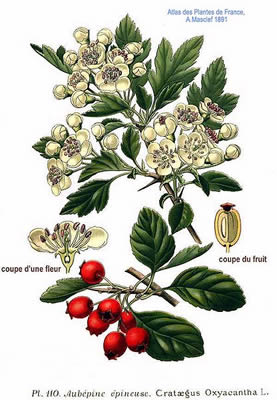 "The fair maid who, the first of May,
Goes to the fields at break of day
And washes in dew from the hawthorn tree
Will ever after handsome be."

But in delicious, blossoming May, when the joy of living fairly intoxicates one, and every bird's throat is swelling with happy music, who but a Calvinist would croak dismal prophecies? In Ireland, old crones tell marvelous tales about the hawthorns, and the banshees which have a predilection for them.

Many country villagers believed that Hawthorn flowers still bear the smell of the Plague of London-the flowers are mostly fertilized by carrion insects, attracted by the suggestion of decay in the perfume. 2
The tree was regarded as sacred, probably from a tradition that it furnished the Crown of Thorns. It adorns the family crest of English royalty, the Oglives, chosen by Henry VII. 2

It is a tree of Mars. The seeds in the berries beaten to powder being drank in wine, are held singularly good against the stone, and are good for the dropsy.
Nicholas Culpeper, 1653