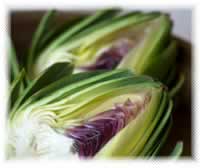 How to Use: Artichoke

Medicinal Uses of Artichoke leaves Teas and extracts made from the leaves of the artichoke plant are a traditional tonic for the liver and gallbladder.1,2 Both laboratory and clinical studies strongly suggest artichoke leaf extract to be a good therapeutic option in dyspeptic syndrome. (irritable stomach, nervous gastropathy, flatulence, irritable colon, functional biliary tract disease) 2 In Europe the plant is widely used to treat arteriosclerosis and lower cholesterol. Several studies have hinted at the ability of artichoke extract to lower lipid levels. It works by affecting cholesterol synthesis in the liver at several points in the synthetic pathway and by increasing the elimination of cholesterol. 1

The plant chemical constiutent cynarin acts as lipolysis-inhibitor in much the same manner as nicotinic acid (niacin), without the gastric upset and flushing that niacin supplents can cause. It may well be that the artichoke, having no such side effects could fill in a gap here. (Weiss, Rudolf Fritz M.D.)

The diuretic properties of the artichoke are also useful in kidney disease.(Mabey,Richard)

Artichoke hearts are a healthy source of fiber, low in calories and and contain potassium, vitamin C, folate, and magnesium.

Artichoke Side Effects: Don't use artichoke leaf if you have gallstones, safety data for pregnant or nursing women has not been established. 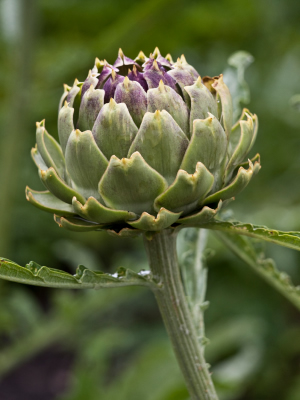 Found in Arizona and California, The modern artichoke is a derivative of the wild artichoke, Cynara cardunculus. Milk thistle, previously denoted as Carduus marianus , was at one time also considered part of this genus.

How to Grow Artichoke

Artichokes require mild winters and cool summers. The plants are quite striking in the vegetable garden with their large, silvery-green leaves and thick stems topped with the pinecone-shaped, edible flower buds.

The use of the artichoke dates back to the 4th century B.C. and is described in the writings of Theophrastus, a pupil of Aristotle.