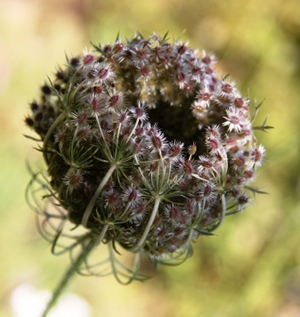 How to Use: Carrot, Wild

The root of the domesticated carrot contains no less than 89 percent of water and about 4.5 percent sugar making them a great snack food for dieters. Common garden carrots are a domesticated form of the wild carrot that has been selectively bred for a large, tender taproot. The seed of the wild carrot, commonly know as Queen Anne's Lace, is the part used medicinally.

Wild carrot seeds have been used historically as a natural morning after contraceptive, but this use remains controversial. 2Wild carrot seeds are not readily available commercially, but can be wildcrafted by those who are very confident in their plant identification skills. Wild carrot is similar in appearance to the deadly poison hemlock, Conium maculatum.

Preparation Methods & Dosage :Carrot seed essential oil can be used externally in skin care. The seeds can be made into teas, or taken in tincture form.

Carrot, Wild Side Effects: Do not use during pregnancy as it can cause abortions. Research conducted on mice has 1 found that wild carrot disrupts the implantation process, which reinforces its reputation as a contraceptive. Chinese studies have also indicated that the seeds block progesterone synthesis, which could explain this effect. Do not use wild carrot seeds for contraception without consulting with a naturopathic physician, or qualified herbalist. 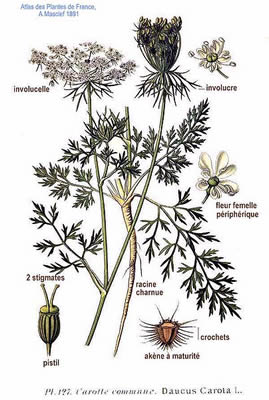 A pest to farmers, a joy to the flower-lover, and a welcome signal for refreshment to hosts of flies, beetles, bees, and wasps, especially to the paper-nest builders, the sprangly wild carrot lifts its fringy foliage and exquisite lacy blossoms above the dry soil of three continents. From Europe it has come to spread its delicate wheels over our summer landscape, until whole fields are whitened by them east of the Mississippi.

The carrot was well known to the ancients, and is mentioned by Greek and Latin writers under various names, the name Carota for the garden carrot is found first in the writings of Athenaeus(A.D. 200), and from the time of Dioscorides and Pliny to the present day, the Carrot has been in constant use by all nations.

Wild carrots belong to Mercury, and therefore break wind, and remove stitches in the sides, provoke urine and women's courses, and helpeth to break and expel the stone; the seed also of the same worketh the like effect, and is good for the dropsy, and those whose bellies are swoln with wind
Nicholas Culpeper, 1653