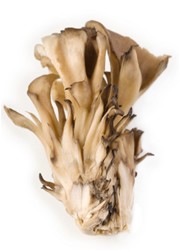 How to Use: Maitake mushroom

Maitake mushroom's use as an adaptogen arose in classic Chinese and Japanese medicine. Maitake mushrooms extracts have shown to increase activity of immune cells in laboratory tests, which bear out its traditional use as a immune system tonic. This delicious mushroom also contains a number of polysaccharides (beta-glucan) that have been shown to fight the formation and growth of tumors, putting maitake in use in cancer prevention strategies.1,2

Maitake helps to protect and support the liver and can lower blood pressure. Mushroom extracts can also have a long term beneficial effect on blood-glucose levels, and may also be useful for weight loss.

Preparation Methods & Dosage :Maitake is an edible mushroom that may be added to cooking, or taken as a tea. Encapsulated products and formulas containing higher levels of polysaccharides can be used in the amount of 3 to 7 grams per day.

In the Kitchen: Maitake mushrooms are delicious, mild and a great addition to your morning omelette.

Traditional Eastern medicine values maitake as an adaptogen, an aid to balance out altered body systems to a normal level, especially the immune system.

Maitake mushroom Side Effects: Some rare cases of allergic reactions can occur. Maitake should be used as a complementary therapy for cancer and HIV/AIDS. It should not be considered a substitute for standard treatments. Do not use maitake if you take interferon treatments 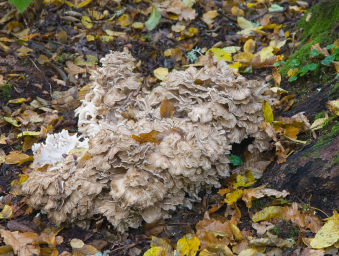 Hen of the Woods


The word maitake is literally translated from Japanese as "dancing mushroom." According to herbal folklore, it was so named because in ancient times people who found maitake could exchange it for its weight in silver, leading to their dancing in celebration.