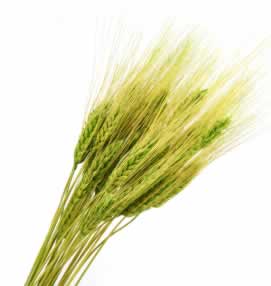 How to Use: Barley Grass

Young barley grass is one of a group of 'green' or superfoods, along with wheat grass and blue green algae, that are characterized by their emerald green hues signaling the presence of high concentrations of chlorophyll. Medicinal and dietary benefits such as good cholesterol and blood pressure levels, improved immune response and cancer prevention, are attributed in part to chlorophyll.2 Barley grass is a very nutrient dense food, providing a high concentration of minerals, vitamins and amino acids per serving, much closer nutritionally to dark, green, leafy vegetables than the grains they will become as they grow. A single tablespoon contains a day's supply of beta-carotene, betaine, biotin, boron, copper, iron, lutein, magnesium, niacin, riboflavin, and thiamine. It also contains nutritionally significant amounts of alpha-linoleic acid, oryzanol, potassium, selenium, zinc, and the tocopherols that make up vitamin E. 3 Green superfoods have suffered from an over abundance of hype, however, they are an excellent addition to your diet. 141

Preparation Methods & Dosage :Used in powdered form in smoothies and to sprinkle on food, and in dietary supplements. Picked fresh to process in juicing machines.

Barley Grass Side Effects: Barley grass may stop lactation in nursing mothers. Not recommended while nursing or pregnant. 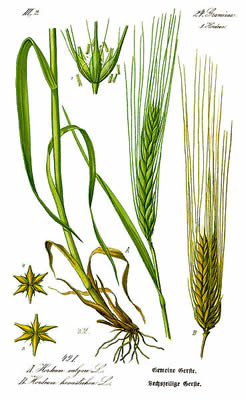 Cultivated barley was a founder crop of Old World food production, barley is referenced in ancient cuneforms etched in clay tablets from the earliest days of history. The word 'barn' comes from the old term 'barley-house'. Barley is a diploid and predominately self-pollinating crop. Hundreds of modern varieties and thousands of land races are known. All cultivars have non-brittle ears, i.e. the spikes stay intact after ripening, aiding in the harvesting by humans. This is in sharp contrast with wild barleys in which ears are always brittle. 1

It is a notable plant of Saturn: if you view diligently its effects by sympathy and antipathy, you may easily perceive a reason of them, as also why barley bread is so unwholesome for melancholy people. Barley in all the parts and compositions thereof (except malt) is more cooling than wheat, and a little cleansing. And all the preparations thereof, as barley-water and other things made thereof, give great nourishment to persons troubled with fevers, agues, and heats in the stomach.
Nicholas Culpeper, 1653