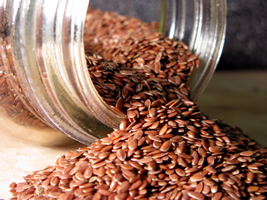 How to Use: Flax seed

Man's relationship with flax is an ancient one, flax played a starring role in our earliest stories and legends and was an important source of food and clothing in Biblical times. (Weiss, Gaea and Shandor) Today, flaxseed is one of the best vegan sources of Omega-3 (ALA), which is so important to health. Having the right balance of essential fatty acids has been shown to be a strong factor in preventing heart disease and lessening the impact of rheumatoid arthritis and other autoimmune disorders. White, Linda B. M.D.

Flaxseed is also an important source of fiber that lubricates the digestive tract, and helps to prevent the spikes in blood sugar that occur after eating. Flaxseed is not a laxative but one of the bulking and lubricating herbal agents that can address long term chronic constipation safely. One to two tablespoons of crushed seeds can be easily incorporated into the daily diet by adding to morning cereals, stewed fruits or smoothies. This is not a quick fix, but a long term nutritional therapy. When using flax to address constipation it is important to drink at least 1 or 2 glasses of water after taking flaxseed to ensure the seeds expand in the stomach and to allow up to 3 days for it to work. (Weiss, Rudolf Fritz M.D.)

Consuming flaxseed over a long period of time is thought to slow the development of breast cancer by blocking estrogen receptors. (Duke,James, Ph.D.) This is due to the lignans that block excess estrogen that may feed tumor growth. The effects of high doses of ligans is still being studied, so far at least no harmful effects have been found by consuming normal doses (2 tablespoons of seed per day)

Preparation Methods & Dosage :Flaxseed can be taken oil form, whole or ground seed. Adding flaxseed to your diet is easy and beneficial to almost anyone. If you are most concerned about getting a good plant based source of ALA, you can take flaxseed oil supplements. If you also want to get the benefits of flax on the digestive system, you need to use the whole seed. Ground flax seed is the form most easily digested, but it only stays fresh for a few months, even under idea conditions, ( cool storage away from light). The best solution is to buy the whole seed, and grind small amounts into meal as you need it.

Flax seed Side Effects: Dry flax seeds should be premixed with plenty of water to avoid digestive upsets. Avoid if you have IBS. 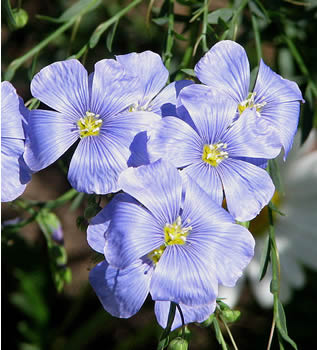 Mercury owns this useful plant. The seed, which is usually called linseed, is emollient, digestive and ripening.
Nicholas Culpeper, 1653