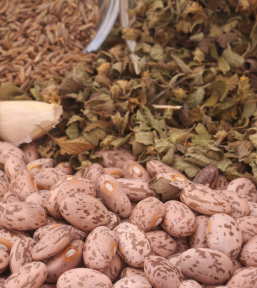 How to Use: Mexican Oregano

Native to the Amercian Southwest, Mexico and Central America, Lippia graveolens leaves are also used to make a traditional "country tea" that was used to treat respiratory infections and late or scanty periods.1

Preparation Methods & Dosage :Used in cooking as a spice and can be made into a traditional tea. Belizeans use 3 cups boiling water to 1/2 cup of fresh leaves or 3 tsps dried. Steep for 15 min.1

In the Kitchen: The leaves of Mexican oregano are used in Mexican cooking as a replacement for oregano. The taste and aroma are similar to oregano, but sweeter and more intense than "true" oreganos of the Origanum genus. The common name of this is misleading because it is not really an oregano at all, it is a Verbena.

Fragrant white flowers appear on this desert shrub after a rain.