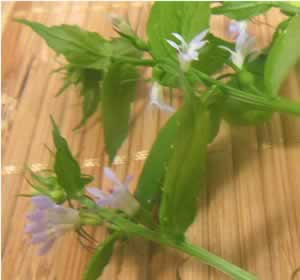 How to Use: Lobelia

Lobelia acts as a relaxant in the presence of pain, and is useful in bronchitis and asthma as an expectorant and stimulant of the respiratory system. 1The herb contains an alkaloid, lobeline, that shares many properties with nicotine, which may be helpful in treating tobacco withdrawal symptoms. A decoction can also be applied externally to minor skin irritations, and to treat sprains, and bruising. 2

Native Americans smoked the leaves of lobelia, known to colonists as Indian Tobacco, to ease asthma. 2 Early American remedies called for a mix of three parts tincture of lobelia with one part tincture of capsicum (red pepper, cayenne pepper).

Lobelia Side Effects: Because of its similarity to nicotine, lobelia may be dangerous to susceptible populations, including children, pregnant women, and individuals with cardiac disease. Excessive use will cause nausea and vomiting. Not recommended for use by pregnant women. 4 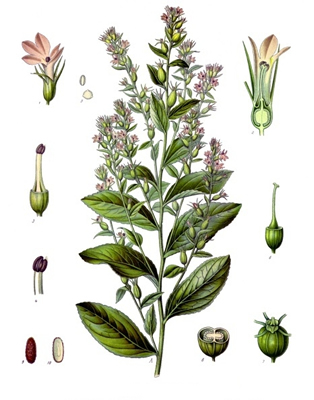 How to Grow Lobelia

The name Indian Tobacco might have arisen either from the peculiar tobacco-like sensation imparted to the tongue and stomach on chewing the leaves, or from the fact that the American Indians often smoked the dried leaves to produce the effect of the drug. Samuel Thomson claims to have discovered the virtues of the plant, though without doubt his first ideas of its emetic property were gathered from the Indians. He went so far as to claim it curative in all disorders, giving it with such a reckless hand that he fatally poisoned one of his patients, a certain Ezra Lovett, for which he was arrested on the charge of murder, escaping punishment because said Lovett was foolish enough to take the prescription of a man who claimed to carry such potent drugs as "well-my-gristle" and "ram-cats." 1