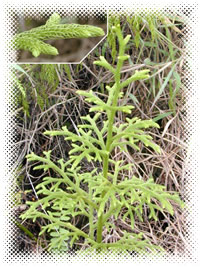 How to Use: Club Moss

The dry, finely powdered spores of club moss are used to promote healing by drying excess moisture that can cause skin irritation and itching in eczema, much like cornstarch or colloidal oatmeal. These antibiotic spores are are non-toxic, unlike the leaves and stems of the plant that contain two poisonous alkaloids, lycopodine and clavadine. Club moss was used as an whole herb in traditional Chinese medicine, and in homeopathic amounts in the West. 1,2

Research on in China on one of the active constituents of club moss, called huperzine a (HupA.) has showed some promise in preliminary studies that show significant improvement the cognitive function in patients with mild to moderate vascular dementia. This had led to its popular use as a memory enhancement supplement.4

Preparation Methods & Dosage :Dried spores as a powder. Most commonly found in extract and capsule form, but is suitable as a tea. Typical dosage: 50 to 100 micrograms in capsules daily

An ingredient in the Traditional Chinese Medicine remedy Qian Ceng Ta, club moss has been used for centuries to treat fever and inflammation.

Club Moss Side Effects: Not to be used while pregnant. Not for long term use. Safe in recommended amounts.

Club Moss is usually ground-creeping, and often inhabits moist places, especially in tropical & subtropical forests. Although it resembles the mosses, it is considered to be evolutionarily more advanced because it is vascular, that is, it has specialized fluid-conducting tissues. Club Moss reproduces by means of spores.


Wolf's claw is an ancient magical plant of the Celtic druids. The oily, yellow spore dust was known as druids flour, it explodes with a bright flash when thrown onto flames, this effect was used to impress the audience of many stone age magicians and 19th century theater directors. 3