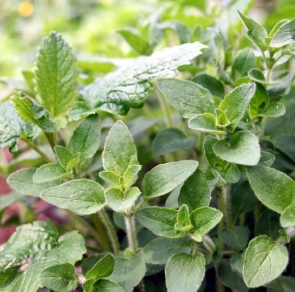 How to Use: Oregano

When Americans think of oregano, we think first and foremost of pizza sauce. Many would be surprised to learn that oregano is ranked first among the culinary herbs in antioxidant power. Many of the medicinal properties of oregano can be attributed to the anti-inflammatory, antibacterial and antioxidant compounds it contains, including carvacrol, thymol and rosmarinic acid. These compounds have shown strong indications both in practice and in clinical studies that they offer protection against cancers, heart disease and stroke. 67 There is evidence to suggest that this may be due in part to the inhibition of COX-2 inflammation. Newmark, 132-133

Oregano, along with other culinary herbs may offer a way to help manage diabetes. These herbs contain several flavonoids that inhibit DPP-IV and should be investigated further regarding their potential in diabetes management. 5

Preparation Methods & Dosage : Oregano tea made from the fresh plant will relieve nervous headache or upset stomach. The leaves can also be used in poultices to reduce pain and swelling. Oregano extracts provide the same benefits of the whole herbs in a concentrated, easy to use form, as does the essential oil. A few drops of oregano oil can be put in the hollow of an aching tooth to relieve pain. Sweet majoram, Origanum marjorana , has a more delicate flavor and aroma.

Oregano oil has a spicy, medicinal aroma and is the most potent anti-bacterial oil used in aromatherapy. 68 Dilute this oil well before using in any massage blends or lotions. Blend it with lemon and cinnamon to cleanse the air in cold and flu.

In the Kitchen: Together with basil, oregano contributes much to the distinctive character of many Italian dishes, but don't limit yourself to only using it in tomato sauces. When using the dried herb, respect it's potency, it's really strong taste can easily overwhelm other flavors in a dish. Be aware that some commercial, dried oregano may be from a mix of plants some not even true oreganos.You can make use of fresh oregano leaves in the summer, which has a lighter taste.

Oregano Side Effects: Oregano is a highly active oil that can be a strong skin irritant - use with care. Avoid in pregnancy 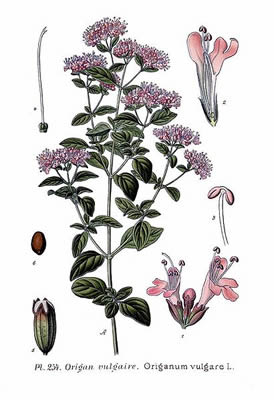 Atlas des plantes de France. 1891
In the older herbals oregano is referred to as Wild Marjoram, which can be confused with the herb known today as wild marjoram, Thymus mastichina , which is a wild-growing species of thyme."

How to Grow Oregano

The name Origanum is derived from two Greek words, oros (mountain) and ganos (joy), in allusion to the gay appearance these plants give to the hillsides on which they grow. Origanum vulgare will grow from seed, however, to make sure the variety is exactly the one you are looking for you may wish to get starter plants at the nursery. Italian and Greek cultivars can be frost hardy, all oreganos benefit from well, drained, dry and sunny locations. Harvest plants when flowering first begins for best flavor.

The name Origanum is derived from two Greek words, oros (mountain) and ganos (joy), in allusion to the gay appearance these plants give to the hillsides on which they grow. Marjoram has a very ancient medical reputation. The Greeks used it extensively, both externally and for fomentations. It was a remedy for narcotic poisons, convulsions and dropsy (edema). 1
Among the Greeks, if Marjoram grew on a grave, it augured the happiness of the departed, and among both the Greeks and Romans, it was the custom to crown young couples with Marjoram. 1