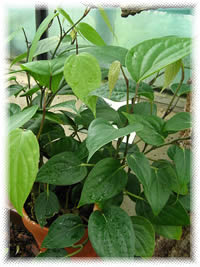 How to Use: Cubeb

In Indian Sanskrit texts cubeb is included in various remedies. Charaka and Sushruta prescribed a paste of cubebs as a mouthwash, or dried cubebs internally for oral and dental diseases, loss of voice, halitosis, fevers, cough. Unani physicians use a paste of the cubeb berries externally on male and female genitals to intensify sexual pleasure during coitus. Due to this attributed property cubebs were called "Habb-ul-Uruus". This use may have been the basis of cubeb as a legendary aphrodisiac. Outside of culinary use as a "red alternative" to black pepper, cubeb is little used in the West.

In traditional Chinese medicine cubeb is used for it's warming property. In Tibetan medicine, cubeb (ka ko la in Tibetan) is one of bzang po drug, six herbs beneficial to specific organs in the body. Cubeb is assigned for the spleen.

Preparation Methods & Dosage :Cubeb is used as a culinary spice

Cubeb essential oil is pungent, slightly camphorous, with a touch of nutmeg. Has stimulant, expectorant, carminative, antiseptic, and diuretic properties. 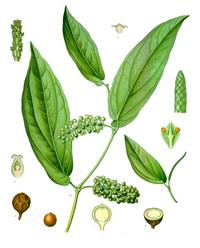 Koehler's Medicinal-Plants 1887
A climbing perennial plant, with dioecious flowers in spikes. Odor is aromatic and taste is pungent and somewhat bitter. Commercial cubebs are often adulterated with other fruits containing a volatile oil, but with very different properties.


Cubeb was thought to be repulsive to demons in Europe as it was in China. Ludovico Maria Sinistrari, a Catholic priest who wrote about methods of exorcism in the late 17th century, includes cubeb as an ingredient in making an incense that wards off incubus.[7] Even today, his formula of the incense is quoted by neopagan authors, some of whom also claim that cubeb can be used in love sachets and spells.