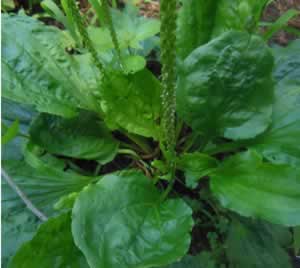 How to Use: Plantain

Plantain leaves are best used fresh, the plant can be put in the blender roots and all. The macerated fresh leaves are put on bee stings and used for skin irritations, malignant ulcers,and burns, and to stop bleeding in minor cuts. Important constituents of plantain is the gluside aucubin and allantoin.

Preparation Methods & Dosage :Mainly used in poultices and salves. Can be brewed into a tea as well. You can juice the fresh plant in the blender by adding warm water to finely chopped leaves This will result in a gooey, dark-green soup. Store in a cold refrigerator for up to two weeks. 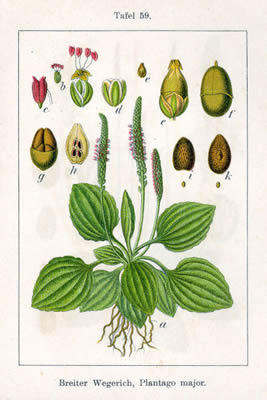 Plantain is useful plant overlooked by many because of its abundance and reputation as a weed. You have probably seen it growing in the cracks of sidewalks, or the middle of your driveway. It is a good source of vitamins C, A, and K. Over two hundred species of plantain grow throughout the world, the two most common to North American are P. major, the broad-leaved or common plantain, and P. lanceolata, the narrow-leaved plantain, (ribwort).

Related Species Plantago psyllium is know for its seeds and husk which are a good source of dietary fiber and are used as an effective laxative.

The American Indian used the abundant plant as the chief remedy for the bite of the rattlesnake, and called it "snakeweed" after this use.
Our Saxon ancestors esteemed plantain highly and in the old Lacnunga (a collection of miscellaneous medical texts,Lacnunga means 'remedies' in Old English) the Weybroed (plantain) is mentioned as one of nine sacred herbs.

It is true, Misaldus and others, yea, almost all astrology-physicians, hold this to be an herb of Mars, because it cures the diseases of the head and privities, which are under the houses of Mars, Aries, and Scorpio. The truth is, it is under the command of Venus, and cures the head by antipathy to Mars, and the privities by sympathy to Venus; neither is there hardly a martial disease but it cures.
Nicholas Culpeper, 1653