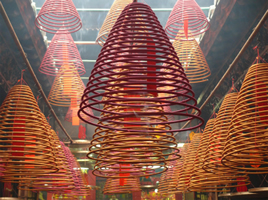 How to Use: Sandalwood

Sandalwood oil is one of the few fragrances that is equally popular among men and women. It's uplifting scent has been considered an aphrodisiac since ancient times. Nickel In aromatherapy it is often used to treat depression and emotional sexual dysfunction. Sandalwood oil is classic choice to relieve itching and inflammation of dry and dehydrated skin. Sandalwood acts as a mild astringent and so can help solved oily skin problems as well. In yet another example of modern science concurring with ancient wisdom, a recent lab study found evidence that synthetic sandalwood acelerated wound healing. 842

Sandalwood oil has a sweet-woody, warm, balsamic aroma that improves with age. The essential oil blends wonderfully with most oils, especially rose, lavender, neroli and bergamot.

In Ayurvedic medicine sandalwood oil is prescribed as a tonic, to treat ulcers and abscesses, and to treat mucus discharge. Walji

Koehler's Medicinal-Plants 1887
Sandalwood is an evergreen semi-parasitic tree that depends on nourishment from other trees for the first seven years. Sandalwood from Mysore region of southern India is generally considered to be of the highest quality available.

Sandalwood is mentioned in the oldest Sanskrit and Chinese texts, and the fragrant wood was used to build temples and carved into statues of gods. The Egyptians used sandalwood for medicine, embalming and religious ritual. Walji