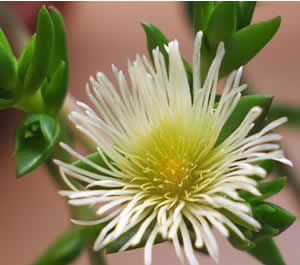 How to Use: Sceletium

Sceletium is a recent newcomer to the western herbal market that has a long history of use in South African traditional medicine. The herb is used as a mild antidepressant and mood booster. Sceletium contains alkaloids that act as SSRIs (selective serotonin reuptake inhibitors), according to research published in the Journal of Ethnopharmacology. This action affects the amount of bioavailable dopamine and serotonin, increasing pleasurable feelings and lessening anxiety, stress and tension. This herb looks very promising however it needs to be noted that most of the buzz around this plant is being generated by companies with a financial interest in its success. Medicinal properties of the unaltered whole plant often do not survive the manufacturing process intact and much can be lost in translation.

Preparation Methods & Dosage : Traditional preparation methods involve crushing the whole plant including roots sealing in a bag to ferment, then dried in the sun. The light brown stringy herb is used much like chewing tobacco. 1 Sceletium that has been imported for use in the West is generally powdered and encapsulated.

Sceletium Side Effects: None noted. Use caution in combination with other herbs or drugs as not much research has been done on this plant.

South African herb once first noted in written records dating back to the 1600s. Recent importation to the West.