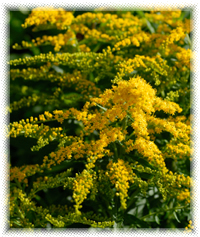 How to Use: Goldenrod

Goldenrod is an amazingly useful plant especially for one whose mainstream reputation is that of an allergy inducing weed. Goldenrod is widespread throughout the lower 48 and Canada. While Solidago virgaurea is the one specific mentioned in the German Commission E monographs, Solidago canadensis, and S. gigantea are also accepted medicinal species. Goldenrod's primary aspects are as an anti-inflammatory urinary tract antiseptic, and a treatment for upper respiratory inflammation and congestion (catarrh). 1,2

About 80 perennial species make up the genus Solidago, most being found in the meadows and pastures, along roads, ditches and waste areas in North America. When I was a child goldenrod bloomed in the fields near my home and made for wonderful late summer daydreaming.

Perhaps the commonest of all the lovely clan east of the Mississippi, or throughout a range extending from Arizona and Florida northward to British Columbia and New Brunswick, is the Canada Golden-rod or Yellow-weed (S. canadensis). Surely every one must be familiar with the large, spreading, dense-flowered panicle, with recurved sprays, that crowns a rough, hairy stem sometimes eight feet tall, or again only two feet. Its lance-shaped, acutely pointed, triple-nerved leaves are rough, and the lower ones saw-edged. From August to November one cannot fail to find it blooming in dry soil.

"Along the roadside, like the flowers of gold That tawny Incas for their gardens wrought, Heavy with sunshine droops the golden-rod."

Venus claims the herb, and therefore to be sure it respects beauty lost. Arnoldus de Villa Nova commends it much against the stone in the reins and kidneys, and to provoke urine in abundance, whereby also the gravel and stone may be voided. The decoction of the herb, green or dry, or the distilled water thereof, is very effectual for inward bruises, as also to be outwardly applied, it stays bleeding in any part of the body, and of wounds; also the fluxes of humours, the bloody-flux, and women's courses; and is no less prevalent in all ruptures or burstings, being drank inwardly, and inwardly, and outwardly applied. It is a sovereign wound herb, inferior to none, both for the inward and outward hurts; green wounds, old sores and ulcers, are quickly cured therewith. It also is of especial use in all lotions for sores or ulcers in the mouth, throat, or privy parts of man or woman. The decoction also helps to fasten the teeth that are loose in the gums.
Nicholas Culpeper, 1653