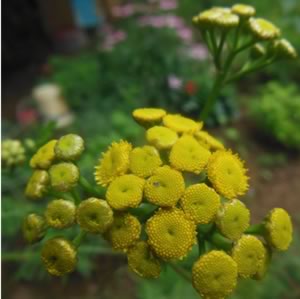 How to Use: Tansy

Tansy was once a widely grown herb with a number of traditional medicinal uses, but one that has lost favor over time with the modern herbal community. Older herbals recommend the use of tansy for many purposes including as an anthelmintic to kill parasites. Mrs. Grieve highly recommends an infusion of tansy be given to children to kill worms among other things.4 Tansy was also used to allievate the pain of for migraine headaches, neuralgia, rheumatism and gout, meteorism( distended stomach due to trapped gas), and loss of appetite. This is an excellent example of how we need to filter our readings of the wisdom of our elder teachers with today's better understanding of plant chemistry. The danger with using tansy rests primarily with it's thujone content, which is responsible for much of tansy's medicinal actions. Thujone is powerful but toxic in large doses. The amount of thujone contained can vary from plant to plant making safe dosing problematic. According to the German Commission E " Uncontrolled usage of tansy, depending on the quality of the herb, can result in the absorption of thujone in toxic amounts, even at normal dosages." 3

Tansy was a popular strewing herb in times past because it's clean, camphorous scent repelled flies and other pests. It is still a good custom to plant tansy outside the kitchen door and around the garden for the same reasons. Although tansy is useful as a vermifuge, and can be used externally as poultice to treat skin infections, it might be wise to look to less dangerous herbs that can serve the same purposes.

Preparation Methods & Dosage : Tansy tea can be made from fresh or dried leaves and is strong and bitter in taste. Tansy tea should be used seldom, if at all, and then only under the guidance of an experienced herbalist. A better use for this herb is to plant it near the garden and enjoy the cheerful yellow blooms while it acts as a natural insect repellent.

Tansy Side Effects: Perhaps the least savory uses of tansy was to end an unwanted pregnancy by drinking a strong tea made of tansy leaves and flowers. This can cause miscarriage and there have been reports of deaths in women attempting to use the tea as an abortifacient. Tansy essential oil is poisonous and should not be used under any circumstances. In large doses, Tansy becomes a violent irritant, and induces venous congestion of the abdominal organs. 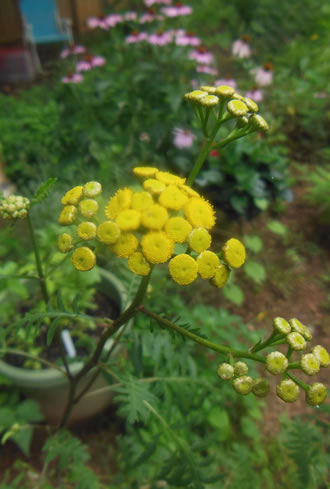 Tansy herb in the garden

Tansy was a popular strewing herb in times past because it's clean, camphoraceous scent repelled flies and other pests. It is still customary to plant tansy outside the kitchen door, and around the garden for the same reasons.
Tansy was widely naturalized in the American colonies by 1785 and practically every farmyard had a clump of this aromatic medicinal herb. Tansy tea was made from fresh or dried leaves and given for cramps, colic, gout and even plague. Tansy leaves were also used as a clear yellow dye for woolens.


The name is said to be a corruption of athanasia, derived from two Greek words meaning immortality. When some monks in reading Lucian came across the passage where Jove, speaking of Ganymede to Mercury, says, "Take him hence, and when he has tasted immortality let him return to us," their literal minds inferred that this plant must have been what Ganymede tasted, hence they named it athanasia! So great credence having been given to its medicinal powers in Europe, it is not strange the colonists felt they could not live in the New World without tansy. Strong scented pungent tufts topped with bright yellow buttons - runaways from old gardens - are a conspicuous feature along many a roadside leading to colonial homesteads. 1

Tansy was hung on the house by Germanic peoples as a protection against monsters. The aromatic herb was also burned as incense. 2

This herb is undoubtedly under the government of Venus. It is an agreeable bitter, a carminative, and a destroyer of worms, for which case a powder of the flowers should be given from six to twelve grains at night and mornings.
Nicholas Culpeper, 1653

Tansy is also valuable in hysteria and in kidney weaknesses, the same infusion being taken in wineglassful doses, repeated frequently. It forms an excellent and safe emmenagogue, and is of good service in low forms of fever, in ague and hysterical and nervous affections. As a diaphoretic nervine it is also useful.