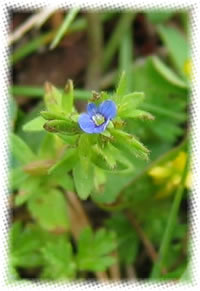 How to Use: Speedwell

Speedwell can be used in herbal tea cough remedies as an expectorant, and also has diaphoretic (sweat -producing), diuretic and tonic properties. 1The plant is rich in vitamins, tannins, and the glycoside aucubin , which has antiinflammatory, diuretic and liver protective actions.2 Speedwell extracts can be added to skin ointments to treat eczema and help heal skin irritations and wounds.

Preparation Methods & Dosage :Tea made from flowering plant, extracts, ointments. If you find this pretty little blue wildflower growing in your yard, try making an herbal tea from the flowering tops.

Speedwell Side Effects: None noted 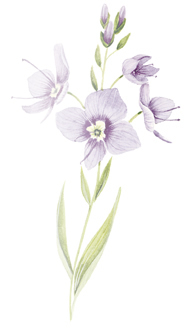 This, the perhaps most beautiful native speedwell, whose sheets of blue along the brookside are so frequently mistaken for masses of forget-me-nots by the hasty observer, of course shows marked differences on closer investigation; its tiny blue flowers are marked with purple pathfinders, and the plant is not hairy, to mention only two. But the poets of England are responsible for most of whatever confusion still lurks in the popular mind concerning these two flowers. Speedwell, a common medieval benediction from a friend, equivalent to our farewell or adieu, and forget-me-not of similar intent, have been used interchangeably by some writers in connection with parting gifts of small blue flowers. It was the germander speedwell that in literature and botanies alike was most commonly known as the forget-me-not for more than two hundred years, or until only fifty years ago. When the Mayflower and her sister ships were launched, "Speedwell" was considered a happier name for a vessel than it proved to be. Netje Blanchan Wild Flowers worth Knowing(1917)

The Common Speedwell is a native of the Old World, but is abundantly naturalized in the eastern United States, where it grows in open, grassy places


An ancient tradition of the Roman Church relates that when Jesus was on His way to Calvary, He passed the home of a certain Jewish maiden, who, when she saw drops of agony on His brow, ran after Him along the road to wipe His face with her kerchief. This linen, the monks declared, ever after bore the impress of the sacred features - vera iconica, the true likeness.