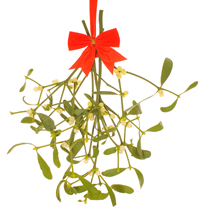 How to Use: Mistletoe

This traditional Christmas decoration is also a medicinal herb. Mistletoe extracts have been extensively studied in Europe as a supplemental treatment in cancer therapy.

Mistletoe herb was used historically in Old Europe for treatment of epilepsy and other convulsive nervous disorders and was used extensively in the 16th and 17th centuries. Mistletoe is a nervine, and a narcotic, that is, it has a profound effect on the nervous system. Eating the berries can cause convulsions in children. Trained herbal practitioners make use of mistletoe Phoradendron flavescens teas to slow the pulse and lower blood pressure, treat arthritic pain and snoring. While there are valuable medicinal uses for this herb, there are also much safer, and less toxic choices to treat the same conditions which are readily available to the home herbalist. For the most part the best way to enjoy mistletoe is in the tradition of decorating our homes in the winter season and reflecting on it's legendary promise of the return of new life in the spring.

Mistletoe Side Effects: All forms of mistletoe are best left to professional practitioners, and are not recommended for the home herbalist. The U.S. Food and Drug Administration (PDA) lists this plant as "unsafe." Mistletoe should be used only under professional supervision as part of an overall treatment plan. At least three standardized injectable extracts have been studied in Europe: Iscador, Helixor, and Eurixor. These products are not designed for self-treatment and are not commercially available in the United States- Mistletoe should be avoided during pregnancy, since it can stimulate uterine contractions. 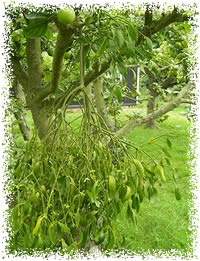 Mistletoe, Viscum album in an apple
tree in Essex, England

Related Species American mistletoe, Phoradendron serotinum is the Eastern Mistletoe of eastern North America, is also classified in the Santalaceae family, but not the same genus as European Viscum genus. American mistletoe has white flowers and leaves that are more rounded and is traditionally used in Christmas decorations. American mistletoe is not equivalent to the Viscum species herbal medicine.


Mistletoe was sacred to the Druids, and branches of mistletoe were hung from the ceilings to ward off evil spirits in ancient Europe. The British Celts decorated their house with holly, mistletoe, and ivy to celebrate the winter solstice. The custom of using mistletoe for decoration of our homes at Christmas is a survival of this old custom.


Kissing under the mistletoe is one of the most widely known holiday traditions. Some trace this custom to the Greek who used mistletoe in the Saturnalia festival. Mistletoe also figures in a Scandinavian legend of Balder, god of Peace, who was slain with an arrow of mistletoe. He was restored to life, and mistletoe was then given into the keeping of the goddess of Love, and it was ordained that everyone who passed under it should receive a kiss, to show that the branch had become an emblem of love, and not of hate. Druids sent round their attendant youth with branches of the Mistletoe to announce the entrance of the new year. 1

This is under the dominion of the Sun, with something of the nature of Jupiter, the leaves and berries do heat and dry, and are of subtle parts ; the bird-lime mollifies hard knots, tuimniin imposthumes, ripens and discusses them, and draws forth thick as well as thin humours from the remote parts of the body...
Nicholas Culpeper, 1653