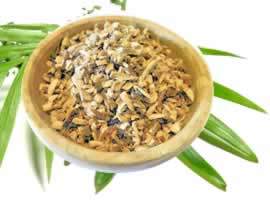 How to Use: Calamus

Sweet flag, or calamus has been used since ancient times, however modern misuse of the root oil has given rise to concerns over its use. Traditionally calamus was used for its effects on the digestive system and the lungs. This herb eliminates phlegm, clears congestion, and tranquilizes the mind. Traditional uses include :amnesia, heart palpitations, insomnia, tinnitus, chronic bronchitis, and bronchial asthma.

The root oil is strong and fragrant, its taste warm, bitterish, pungent and aromatic. Its active principles are taken up by boiling water. It is a thick, pale yellow liquid, and has a high toxicity(see cautions.)

In Europe calamus is used as a digestive aid, helping to counter acidity and ease heartburn and dyspepsia. The root is also chewed to help toothache and to help stop smoking. Acorus can blunt gastric upset during the acute phase of drug withdrawal.

Preparation Methods & Dosage :Traditionally taken as a tea, however internal use is not recommended for the casual user. Seek guidance from a herbal practitioner. Calamus may be used externally as a bath additive, or as an alcohol rub for sore muscles and circulation.

In TCM sweet flag is used to treat deafness, dizziness and epilepsy. It is used by the Akha people of Thailand for stomachache. The Chinese use it for vomiting, diarrhea, abdominal pain, and dysentery. 2

Calamus Side Effects: The essential oil of calamus contains aserone, which has a high toxicity. In high doses, it is hallucinogenic. European varieties have a low concentration of aserone compared to those from India. The FDA has issued warnings about the marketing of Aserone contained in Calamus extract as a "Legal Ecstasy", and does not permit the use of calamus in food products. Do not use this herb internally without the supervision of a qualified expert. Use the whole herb only in external applications; never use the essential oil of calamus in extract form. 2,3,4 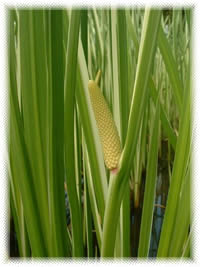 Sweet Flag was brought to Europe by the Tartars in the thirteenth century, and is one of the herbs mentioned in the book of Exodus. 2

The name 'acorus' is derived from the Greek word 'acoron', a name used by Dioscorides, which in turn was derived from 'coreon', meaning 'pupil', because it was used in herbal medicine as a treatment for inflammation of the eye. 5


The Hebrews used the oil pressed from Acorus, along with oils of olive, cinnamon and myrrh ,in a sacred anointing oil used at the Tabernacle, and used the leaves as a sweet, strewing herb for all places of worship. Acorus leaves are still scattered today on festival days. 1