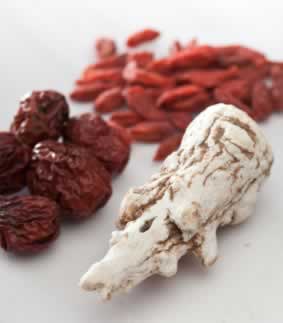 How to Use: Dong Quai

In traditional Chinese medicine, only ginseng is more esteemed. The name dong quai means proper order and for thousands of years the dried roots have been used to restore a healthy order to the body. Since ancient times, dang-quai has been an important herb for women. The phytoestrogens in dong quai work to bring the body's natural estrogen into balance. (Duke,James, Ph.D.) Historically, it has been prescribed for uterine bleeding, painful menses, and other abnormalities of the menstrual cycle. For menopausal women it addresses symptoms such as hot flashes, night sweats and mood swings. (Gladstar, Rosemary) .

A decoction of the whole root is considered diuretic and strongly antibacterial. Anti-inflammatory, analgesic, and antispasmodic activity have been confirmed in experiments. Considered the most important Chinese herb for menstrual disorders, its blood tonic, circulation-enhancing, pain-relieving, tranquilizing, and liver-protecting qualities are sometimes overlooked. Dong quai contains many nutrients, from metals like cobalt, copper and manganese, to plant sterols, which have similar chemical structures to human hormones like estrogen. Among the active medicinal ingredients are coumarins, essential oils, and various flavonoids. Dong quai strengthens the immune system by increasing production of white blood cells, assisting the liver in ridding the body of toxins. This immune enhancement may come into play in cancer prevention and as an adjunct to debilitating effects of treatment. (Duke,James, Ph.D.)

Preparation Methods & Dosage :1 to 3 tablespoons of fresh root, 2 to 6 grams of dried root, or 1 teaspoon to 1 tablespoon liquid extract daily. The sliced root is easier to work with than the whole.

For over two thousand years, since the writing of the Divine Husband's Classic of the Materia Medica, Chinese herbal medicine has used dong quai to help women return to their natural hormonal and emotional states after the accumulation of toxins and emotional injuries in the energy organ known as the liver. Mountain Rose Herbs

Dong Quai Side Effects: Not for use while pregnant or if you have an acute viral infection. May stimulate bleeding. If taken over long period of time, it is suggested discontinue use during the monthly menstrual cycle. 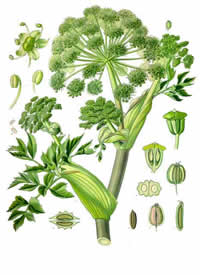 Dong quai, or dan-gui is one of nine species of angelica, part of the parsley family, a plant family known for vegetables like carrot and parsnips, herbs like parsley and caraway, and its highly toxic members, including poison hemlock. European varieties include Angelica officinalis or Angelica archangelica, the American variety is Angelica atropurpurea, which is used interchangeably with its European cousin, but it is the Chinese and Japanese variant, sinesis, (of China) that is the most valued and studied.