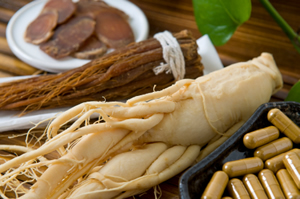 How to Use: Ginseng

Ginseng is one the best known and widely prescribed herbs in Chinese medicine as a general adaptogenic and restorative tonic. The German Commison E has approved ginseng as a tonic for invigoration and fortification in times of fatigue and debility, for declining capacity for work and concentration, also during convalescence. Adaptogens such as ginseng are highly regarded in both Western and Eastern traditions for use in debilitated persons suffering from exhaustion, fatigue, liver disease, stress and wasting from chronic disease. Ginseng may boost mood and improve memory and attention spans for those under stress. Although the exact mechanisms of activity are not known, it is likely that ginseng protects a portion of the brain known as the hippocampus from the effects of stress hormones. (Duke,James, Ph.D.) Ginseng enhances the immune response which helps fight off viruses and bacteria. (Foster, Steven and Yue "Herbal Emissaries") Ginseng is one of the best known herbal tonics used to restore libido in men without an increase in testosterone, which can aggravate prostate disorders.(Meletis, Chris D.) Unfortunately, the fame of ginseng has led to misconceptions about its use and to low grade or adulterated products being sold as ginseng in the West.

Panax, the generic name is derived from the Greek Panakos (a panacea), in reference to the miraculous virtue ascribed to it by the Chinese, who consider it a sovereign remedy in almost all diseases. The word Ginseng is said to mean wonder of the world, however, it is not universally applicable in every illness. It should not be taken during acute inflammatory disease or bronchitis since it can drive the disease deeper and make it worse. Chinese medicine considers ginseng to be one of the most yang herbs, suited to health problems related to a deficency, or fraility (considered to be more yin). For someone with a very strong yang condition, the effects of ginseng will hardly be noticable and is actually contraindicated for those whose yang condition is causing high blood pressure. This may explain the conflicting reports here in the West on whether ginseng is a cure for high blood pressure, or worsens it. (Weiss, Gaea and Shandor) Moreover, in China, ginseng is rarely used on its own, but is usually combined with other herbs, such as licorice or Chinese dates, which temper its powerful nature. Most herbalists recommend taking periodic rests from ginseng as it can raise anxiety levels in some people. White, Linda B. M.D.

Preparation Methods & Dosage : Ginseng is often taken for a month at a time, alternating with a two week rest period. Ginseng powder can be taken in teas, added to soft drinks, or even used in cooking soups. Ginseng roots are also used as extracts, and in capsule supplements.

Ginseng Side Effects: Do not use during pregnancy. Consult with a health professional before self treating if you have high blood pressure.

Grades of ginseng. Not all ginseng is created equal. Wild ginseng, like many other herbs is preferred over cultivated varieties. Cultivated ginseng comes in two varieties, white and red. The red is cured by steaming which gives it its colour and reputedly a warmer nature than the white. Most Korean ginseng is of the red variety and is stronger or more yang in nature than that from China. 2

How to Grow Ginseng

Ginseng is not harvested until the fourth year, a mature ginseng plant is 10 to 20 inches high. The cylindrical, long root has prominent wrinkles and is forked ant both the bottom and sides, creating the "man root" shape. Ginseng is a challenging plant to grow, and not for the impatient gardener.

Ginsengs uses are legendary, and its lore springs from ancient times in China, as well as Native American folklore in North America.
The roots are called, by the natives of China, Jin-chen, meaning 'like a man', in reference to their resemblance to the human form. The American Indian name for ginseng, garantoquen, has the same meaning.