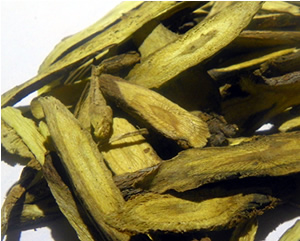 How to Use: Licorice

Many herbalists regard licorice as a natural alternative to hydrocortisone as it acts much like your body's own natural corticosteroids. Among its many medicinal benefits, licorice is considered an adrenal tonic, in particular, it increases production of the very chemicals that aid in the body's recovery from chronic anxiety and stress. White, Linda B. M.D. The herb's action as a fast-acting anti-inflammatory agent are attributed to the steroid-like actions of the triterpenes glycyrrhizin and glycyrrhetic acid (GA). Glycyrrhizin is a glycoside, a carbohydrate that yields a sugar and a non-sugar when broken. It tastes 50 times sweeter than sugar and is the major triterpenoid in licorice. Glycyrrhizin blocks prostaglandin production and inflammation with an antiarthritic action similar to hydrocortisone. ABC Although it supports the body's release of cortisol, it also inhibits some of the more detrimental side effects of that hormone's presence. It is used in many formulations to activate and increase the effects of other herbs. Licorice can also be used topically to tame autoimmune inflammatory reactions such as psoriasis. (Duke,James, Ph.D.)

Licorice is often used in bronchitis and cough remedies to soothe sore throats. It is expectorant, anti-inflammatory, and directly antiviral. A licorice derivative, deglycyrrhizinated licorice (DGL) is an excellent demulcent, and commonly used for throat, stomach, urinary, and intestinal irritations. Licorice has estrogenic and other steroidal properties and is used to normalize and regulate hormone production. (Gladstar, Rosemary) Altogether licorice root has such wide ranging and diverse medicanal properties it is no wonder it remains one the most widely used herbs in the traditions of many cultures both East and West.

In a recent survey of Western medical herbalists, licorice ranked as the 10th most important herb used in clinical practice. An astonishing number Chinese herbal formulas (over 5,000) use licorice to sweeten teas and to "harmonize" contrasting herbs. (Foster, Steven and Yue "Herbal Emissaries")

In traditional Chinese medicine Gan-cao (licorice) is used in prescriptions for weak spleen and stomach energy, for coughs, sore throats, asthma, carbuncles, swelling with pain, sores with toxic matter, stomach ulcers, hepatitis, hysteria, and as a detoxicant for food or medicine poisoning, as well as to "mediate" or "harmonize" the poisonous character of toxic medicinal plants. 2

Licorice Side Effects: Not for long term use without medical advice, the key to using licorice is moderation. Licorice root can elevate blood pressure, lower potassium and cause water retention. Not for those who have hypertension, kidney problems, diabetes or heart problems.

Licorice is not really a flavor, rather the herb licorice has the sweet, somewhat musty flavor of anise. Licorice root is derived from the Mediterranean native species Glycyrrhiza glabra, the pea family. It was know to the old Greek writers, and mentioned by Theophrastus to be used for asthma, dry cough, and all diseases of the lungs. The plant was being cultivated in Europe and England by the end of the sixteenth century, is naturalized in North America. China has at least six species and Chinese herbals from every dynasty in Chinese history give the plant prominent recognition. As in the past, licorice is still one of the most commonly used traditional medicine herbs.