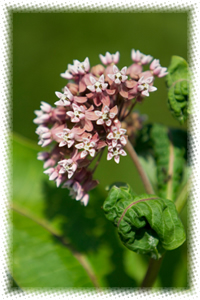 How to Use: Milkweed

All the plant members of the milkweed family have similar properties, however, milkweed, Asclepias syriaca is better known as the preferred food of the milkweed butterfly (Danaus plexippus.) Milkweeds secrete latex containing cardiac glycosides that are medicinally valuable in the treatment of heart disease. This same latex is an old home remedy for warts. These compounds are also part of a chemical defense that the butterflies deploy against birds who would prey on them, explaining in part their fascination with these plants. 1

Milkweed Side Effects: Avoid large doses, this plant emetic and purgative. This species is not widely used in herbal medicine. 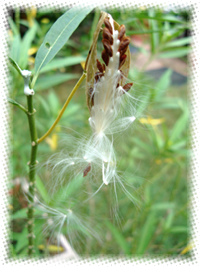 “One cannot stay long around a patch of milkweeds without seeing the monarch butterfly (Anosia plexippus), that splendid, bright, reddish-brown winged fellow, the border and veins broadly black, with two rows of white spot on the outer borders and two rows of pale spots across the tip of the fore wings. Like the dandelion, thistle, and other triumphant struggles for survival, the milkweed sends its offspring adrift on the winds to found fresh colonies afar. From eastern Massachusetts to Virginia, and westward to the Mississippi, or beyond, it is to be found in dry fields, woods, and thickets. (Netje Blanchan. "Wild Flowers Worth Knowing". (1917))

“ On the first of November, when Mexicans celebrate a holiday called the Day of the Dead, some also celebrate the millions of monarch butterflies that, without fail, fly to the mountainous fir forests of central Mexico on that day. They are believed to be souls of the dead, returned. This year, for or the first time in memory, the monarch butterflies didn't come, at least not on the Day of the Dead. They began to straggle in a week later than usual, in record-low numbers. Last year's low of 60 million now seems great compared with the fewer than three million that have shown up so far this year. Some experts fear that the spectacular migration could be near collapse. Jim Robbins

The contrast between these two descriptions of the iconic monarch butterfly in our American landscape makes clear how much has been lost. We notice the monarch and bees because they are iconic insects, But what do you think is happening to everything else? A major cause is farming with Roundup, a herbicide that kills virtually all plants except crops that are genetically modified to survive it. As a result, millions of acres of native plants, especially milkweed, an important source of nectar for many species, and vital for monarch butterfly larvae, have been wiped out. One study showed that Iowa has lost almost 60 percent of its milkweed, and another found 90 percent was gone. The agricultural landscape has been sterilized. You can help! Become an active participant now. Make a difference today. It all starts with one seed...and you to plant it. Live Monarach


The milkweeds (Asclepias)were named for Aesculapius, who is said to have learned his knowledge of healing from an apprenticeship to Cheiron, the centaur whose herbal and medical skills came directly from Apollo.