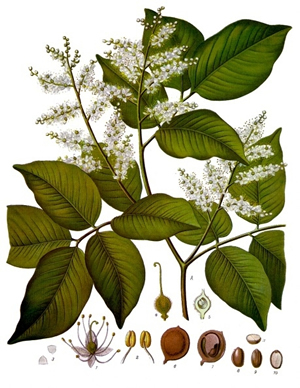 How to Use: Copaiba Balsam

Copaiba oil has been documented with antibacterial, diuretic, disinfectant and stimulant properties. The resin contains caryophyllene, a phytochemical with strong anti-inflammatory, fungal and pain relieving properties. The hydrocarbons in copaiba are terpenes, including, pinene, commonly known as turpentine. Copaiba is used topically to relieve inflammation and help heal athlete's foot, eczema and psoriasis, and heals damaged skin with minimal scarring. Shampoos containing copaiba are effective in fighting dandruff.

Copaiba balsam been found most beneficial in chronic coughs, catarrh, colds, bronchitis, and other respiratory problems. Copaiba is often paired with tulu, or Peru balsam in shampoos and skin products, and resembles them in action. 1

How to Grow Copaiba Balsam

Illegal harvesting and logging has put many species that are the source of aromatic oils in danger. Unless you are certain that the product you are buying comes from a sustainable source, you could be contributing to the extinction of these valuable rainforest species. 2