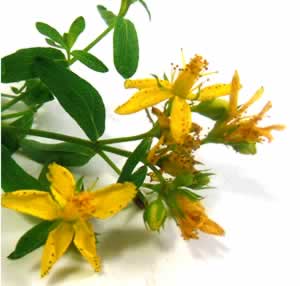 How to Use: St. Johns Wort

St. Johns Wort has a demonstrated ability to act as an antidepressant in cases of mild depression and anxiety. St. John's Wort is a tonic for the entire nervous system. This action is most strongly linked to two phytochemicals, hyperforin and hypericin. 90 St. Johns was a useful member of the pharmacopoeia centuries before its use as an antidepressant was discovered. Drinking a cup of St Johns tea before bedtime can help children and adults troubled by incontinence, and M. Grieve recommended it be used in all pulmonary complaints, bladder troubles, in suppression of the urine, dysentery, worms, and diarrhea. 91

St. John's is also effective in the treatment of herpes lesions. Compresses soaked in a strong tea, the infused oil or a tincture can be applied to active lesions. The anti-viral activity of St. John can also be used to treat flu viruses (but not cold viruses)92

The fresh flowers of St. Johns when infused in oil produce a beautiful and powerful red oil that is anti-inflammatory and analgesic. This therapeutic oil has so many uses that you can sum it up by saying if it hurts, soothe it with St. Johns Oil. Some of the skin care uses for this oil include healing burns and damaged skin. Use St. Johns wort oil to calm the pain of sciatica, arthritis, fibromyalgia, muscle aches, PMS and breast tenderness. 93 94

Preparation Methods & Dosage :St. Johns can be taken in teas as a general nervous system tonic, standardized capsules and tinctures are most often used in treating depression. St. Johns Wort oil is used as an external skin treatment.

St. Johns Wort Side Effects: St. Johns can alter the physiologic impact of MAOIs and SSRIs. 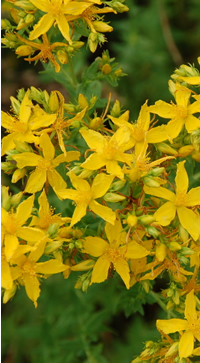 "The flower gets its name," says F. Schuyler Mathews, "from the superstition that on St. John's day, the 24th of June, the dew which fell on the plant the evening before was efficacious in preserving the eyes from disease. So the plant was collected, dipped in oil, and thus transformed into a balm for every wound." Here it is a naturalized immigrant, not a native. A blooming plant, usually with many sterile shoots about its base, has an unkempt, untidy look; the seed capsules and the brown petals of withered flowers remaining among the bright yellow buds through a long season. The Shrubby St. John's-wort (H. prolificum) bears yellow blossoms, about half an inch across, which are provided with stamens so numerous, the many flowered terminal clusters have a soft, feathery effect. In the axils of the oblong, opposite leaves are tufts of smaller ones, the stout stems being often concealed under a wealth of foli­age. Sandy or rocky places from New Jersey southward best suit this low, dense, diffusely branched shrub which blooms prolifically from July to September. Farther north, and westward to Iowa, the Great or Giant St. John's-wort (H. Ascyrori) brightens the banks of streams at midsummer with large blossoms, each on a long footstalk in a few-flowered cluster. Netje Blanchan Wild Flowers worth Knowing(1917)

How to Grow St. Johns Wort

St. Johns is a sun loving, shrubby perennial whose yellow flowers bloom in the summer. You can grow direct from seed or transplant. The plant reaches a height of 1 to 2 feet and needs about a foot a space around it. St. Johns is considered an invasive weed that can cause trouble to livestock, so while a few garden plants are easy enough to keep contained, be careful of trying to grow it in situations where it could escape cultivation.

St John's wort is effective as a compress for dressing wounds. In the Middle Ages it was commonly used to heal deep sword cuts.


There are many ancient superstitions regarding this herb. Its name Hypericum is derived from the Greek that means 'over an apparition', a reference to the belief that the herb was so obnoxious to evil spirits that a whiff of it would cause them to fly. If you pinch the leaves or the petals they give out a reddish purple stain- the "blood of St. John". Keeping this herb in your garden will protect you from fairy trickery. Carrying a few stems of the foliage was an old way to avoid being "fairy-led", or lost and confused while wandering through the local enchanted forest.

It is under the celestial sign Leo, and the dominion of the Sun. It may be, if you meet a Papist, he will tell you, especially if he be a lawyer, that St. John made it over to him by a letter of attorney. It is a singular wound herb; boiled in wine and drank, it heals inward hurts or bruises; made into an ointment, it open obstructions, dissolves swellings, and closes up the lips of wounds
Nicholas Culpeper, 1653