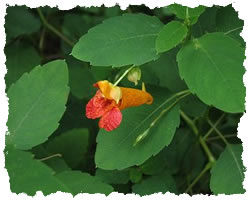 How to Use: Jewel Weed

The juice of jewelweed is a traditional remedy for all sorts of skin ailments including poison ivy. An oft-repeated folk saying, "Wherever poison ivy is found, jewelweed grows close by". To use it, you can simply crush the leaves and rub it on the itchy places. Jewelweed has enjoyed a popular place in home remedies for centuries. Its medical qualities have not shown much promise in scientific studies, but that doesn't mean much to those who use it and swear by its effectiveness.

Preparation Methods & Dosage :Raw juice and leaves are used in topical skin treatments to counteract rashes and skin irritation, most notably those caused by poison ivy.

In the Kitchen: The edibility of jewelweed is a subject of debate with many sources considering the plant toxic. However, the young fresh shoots gathered before the plant flowers are edible according to the indomitable Euell Gibbons1, who cooked them "like green beans". Jewelweed is also eaten as a spring green in West Virginia, where it grows wild.2"

Jewel Weed Side Effects: The juice of the fresh mature leaves is for external use only. 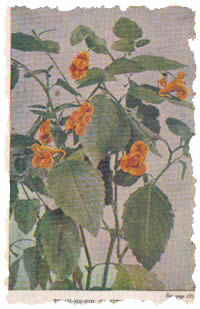 These exquisite, bright flowers, hanging at a horizontal, like jewels from a lady's ear, may be responsible for the plant's folk-name; but whoever is abroad early on a dewy morning, or after a shower, and finds notched edges of the drooping leaves hung with scintillating gems, dancing, sparkling in the sunshine, sees still another reason for naming this the Jewel-weed. In a brook, pond, spring, or wayside trough, which can never be far from its haunts, dip a spray of the plant to transform the leaves into glistening silver. They shed water much as the nasturtiums do.

Familiar as we may be with the nervous little seed-pods of the touch-me-not,which children ever love to pop and see the seeds fly, as they do from balsam pods in grandmother's garden, they still startle with the suddenness of their volley. Touch the delicate hair-trigger at the end of a capsule, and the lightning response of the flying seeds makes one jump.

Under the name of Jewelweed the herbage of Impatiens aurea and of I. biflora are largely employed in domestic practice and by homeopaths and eclectics. The herbs have an acrid, burning taste and act strongly as emetics, cathartics and diuretics, but are considered dangerous, their use having been termed 'wholly questionable.3