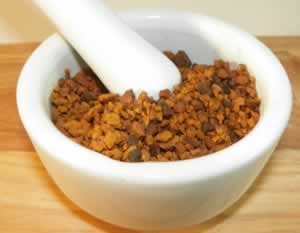 How to Use: Chaga

Chaga mushrooms, or cinder conks, have been a staple of traditional medicine for centuries among the peoples of the boreal forests in Siberia, Asia and North America. They are used as a tonic and blood purifier. They belong to the Polypores, a group of mushrooms that grow on wood and may be the ancestors of most gilled mushrooms. Chaga and the similar reishi mushroom both have a reputation as tonics for longevity and health which are born out by recent scientific studies. These mushrooms show great promise for their anti-viral activities, immune response stimulation and anti-tumor effects that inhibit the spread of cancer cells. 1,2

Preparation Methods & Dosage :Chaga is most often drunk as a mushroom tea, but is also available as liquid extracts.

Chaga Side Effects: None noted. Use with caution when pregnant, breastfeeding, and with small children. 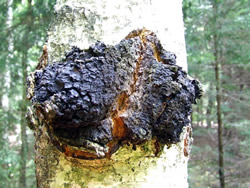 Chaga is a mushroom, a parasitic fungal growth that looks like the charred remains of burned wood on the side of a birch tree. Chaga conks are somewhat rare, and are found in northern climates, predominantly in Poland, Western Siberia, and throughout North America. Unlike most mushrooms,Chaga mushrooms get their nutrients from living trees, rather than the forest floor, a process that most often unfortunately kills the host tree.

How to Grow Chaga

In the forests of northern part of Canada medicinal conks are available for harvest from public lands. Economically marginalized communities in these areas could benefit from cooperative collection and extraction of these medicinal mushrooms. 3

Chaga was documented by Chinese herbalist Shen Nong in his herbal texts as early as the first century B.C.E. Russian folk medicine used chaga for ailments of the stomach, liver, and heart, as well as a tonic, blood purifier, and pain reliever. Chaga remains popular in Russia today, where it is sold as Befunigin, as a cancer cure. 1