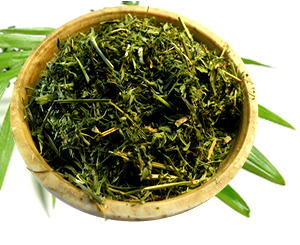 How to Use: Alfalfa

Alfalfa leaf contains a broad spectrum of nutrients, including considerable quantities of protein, trace mineral and vitamins, dietary fiber and chlorophyll, which serves as an antioxidant in the bloodstream. The deep root system absorbs minerals from the soil resulting in a plant rich in vitamins and minerals and a great source of fiber and protein. Alfalfa leaf is rich in protein and vitamins A, D, E, and K. Alfalfa extract is a good source of chlorophyll and carotene. It is important to insist on certified organic alfalfa, since the plant concentrates cadmium, copper, lead, nickel, and zinc when it is grown in contaminated soils. The leaves contain eight essential amino acids. Alfalfa sprouts are a staple of salads and contain nutrients, but the leaves hold the best healing potential.

Alfalfa is not recommended as primary treatment for any condition, alfalfa is a tonic herb, one that supports health by nourishing the body. Alfalfa is of special interest to women because of its estrogenic activity. Duke Chemicals in alfalfa called saponins can help lower blood cholesterol (by impeding intestinal absorption) without affecting heart-healthy HDL cholesterol. 650

Preparation Methods & Dosage :Alfalfa can be taken in capsules, teas or eaten as fresh raw sprouts that have been rinsed thoroughly to remove mold. Alfalfa tea is mild and good tasting, and blends well with many other tonic herbs like nettle, mints, and citrus.

Alfalfa known as Mu-Su in Chinese medicine, made its way to China during the late Han Dynasty(around 2000 A.D.) from Persia. One of its most common uses in Chinese medicine is in the treatment of ulcers. It is also used to strengthen digestion and stimulate appetite. 2

Alfalfa Side Effects: If you have lupus or are in remission, you shouldn't consume alfalfa seeds. Use alfalfa only during its prebloom stages of growth. Alfalfa seeds should never be eaten unless sprouted because they contain high levels of the toxic amino acid canavanine. 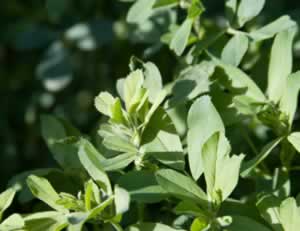 
Alfalfa is believed to have the power to bring good fortune in matters of money, business and good luck in gambling. This symbolism may stem from its use as a high quality hay that keeps animals fed in times of want.