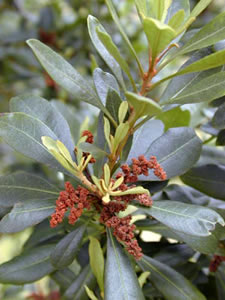 How to Use: Bayberry

Some research shows that bayberry contains astringent and antibacterial compounds. Myricitrin, the active antibiotic, encourages sweating, which can help break a fever. 1Bayberry was used to treat fevers by the Choctaws in the South, and the American colonists used it for dysentery. 19th century herbalist Samuel A. Thompson used bayberry, along with cayenne, lobelia and steam baths as detoxifying treatments extensively in his somewhat controversial practice. 3,4

Preparation Methods & Dosage :Decoctions of the root bark, and poultices.

Bayberry Side Effects: In large amounts bayberry can elevate blood pressure and deplete the body of potassium. Avoid in pregnancy.

The southern wax myrtle is a shrub or slender tree up to 40 feet high. The leaves are from 1 to 4 inches long, narrow, wedge-shaped, entire or with a few teeth, and have a fragrant odor when crushed. The flowers appear from March to May, according to locality, generally before the leaves are fully expanded. Male and female flowers are borne on separate trees, the male flowers in cylindrical yellow clusters and the female flowers in green somewhat shorter clusters. The fruit, which remains on the tree for several years, consists of clusters of round, 1-seeded, somewhat berrylike nuts covered with a whitish wax. Northern bayberry is a shrub 8 feet high or less, with broader and blunter leaves. 2

Bayberry was an indespensable herb in early American herbal practice in the treatment of hemorrhages of the uterus from miscarrage or excessive menstruation. It was used in conjuction with wild ginger and cayenne to in cases of poor circulation and flu. The berries were boiled, and the cooled wax scaped from the surface was used in fragrant candles to grace the home. The scent of bayberry candles is still associated with the American Christmas holiday season .Alma Hutchens (Handbook of Native American Herbs, p16)