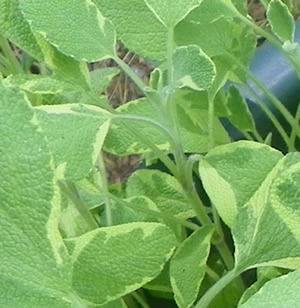 How to Use: Sage

Cur moisture homo cui Salvia crescit in horto? “ Why should a man die whilst Sage grows in his garden?”

The Arabs, along with everyone from the Chinese to the Gypsies all believed that sage was the key to a long life. This is the same sage that in most modern households gathers dust for most of the year, only to be brought out in the fall to season the Thanksgiving dinner, usually used with too heavy a hand, explaining its unpopularity with cooks during the rest of the year. Sage is one those extraordinary, ordinary herbs whose longstanding and familiar use leads us to greatly underestimate it. The uses of sage outside of the kitchen range from the mundane to the mystical, from a cure for the common cold to the psychoactive effects of Salvia divinorum and Salvia apiana in ceremonial and religious celebrations.

The tradition of using sage in the culinary arts of Thanksgiving began with the early American colonists,7 Sage is an excellent digestive herb when used for seasoning on meals of rich meats and fowl. The colonists also considered sage a valuable remedy for colds and fevers in the harsh New England winters. There is something very grounding and relaxing about a hot cup of sage tea with lemon, sipped slowly while the winter holds court outside your warm home. The cold and sniffles seem to melt away in the fragrant steam. Sage has excellent antibacterial and astringent properties, which explains it popular use in gargles for sore throats, gingivitis and sore gums. A strong sage tea or tincture diluted with water can be used. (Grieve, Maud)

Sage is an excellent natural disinfectant and deodorizer, drying perspiration and helping to eliminate body odor. Extracts of sage are used in personal skin care for its capacity to heal the skin as well. (White, Linda B. M.D)

Using sage to darken greying hair comes down to us from the gypsies, and I can personally attest to the fact that it works. What I like about it is the subtle effect, just a gradual darkening that doesn't leave you with ugly gray roots. Sage also leaves the hair feeling soft and shiny, and the scalp invigorated. Sage does not stop at making you look younger, it can also help prevent those "senior moments" as well. Both clinical studies and traditional wisdom agree that sage (Salvia officinalis) or Spanish sage (S. lavandulifolia) has positive effects on memory and concentration in both older people with cognitive problems and younger people with ADD. 1

Preparation Methods & Dosage :Sage can be used fresh or dried both as a culinary herb and medicinal herb. Sage can be taken as a tea, and the infusion can used externally as a skin and hair rinse, and as a gargle for sore throats. Liquid extracts can be diluted with water and easily applied to teeth and gums. The essential oil is used sparely, and is never ingested. White sage is burned as incense in Native American ceremonies.

Sage oil is occasionally used in perfumery in herb-type, spicy, and masculine scents. The undiluted essential oil can cause skin irritations and should never be taken internally.

The Chinese have long valued sage for its healing properties. Red sage or dan-shen Salvia miltiorrhiza is one of many Chinese species in the genus, and is a very commonly used in traditional Chinese herbal medicine to relieve pain after childbirth and regulate menstruation. Combined with dan-gui, it is used to regulate suppressed menstrual flow.

Sage Side Effects: Adverse reactions are likely only with overdoses (more than 15 g sage leaf per dose) or prolonged use. (Hoffmann, David) 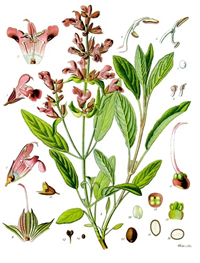 Koehler's Medicinal-Plants 1887
Sage is a shrubby perennial herb of the mint family native to the Mediterranean. There are over 500 varieties of sage, and most are medicinally useful. They grow throughout the tropical and temperate zones and many of them have medicinal and culinary value. Of the hundreds of species of sage, only a handful are used in cooking. Culinary varieties include golden garden sage, dwarf garden sage, and the sweet pineapple sage.

How to Grow Sage

Cur moriatur homo cui Salvia crescit in horto? “ Why should a man die whilst Sage grows in his garden?”

There are over 900 salvia species, about 80 or so are cultivated for ornamental or medicinal purposes. You could devote an entire garden to this amazing plant. Most sages are tender, shrubby, perennials found growing in dry, temperate climates worldwide. My favorites include Salvia officinalis , common garden sage, S. elegans, Scarlet Pineapple, and S. sclarea, Clary Sage.

Salvia elegans
Pineapple Sage or Tangerine Sage is one of the best tasting cultivars for teas and use in cooking. The bright red flowers bloom in the fall in my area of the Southern US, and form a beautiful contrast with the green leaves. The flowers attract hummingbirds, butterflies and other pollinators to your garden. Golden Pineapple sage has lighter-yellow colored leaves. Pineapple sage is a traditional medicinal herb in Mexico where it blooms year round.
Salvia lavandulifolia
Spanish, or lavender sage is the species studied most in memory enhancement
Salvia divinorum
also known as Diviner's Sage, Sage of the Seers, or simply by the genus name, Salvia, is known as the most psychoactive of the salvias.
Salvia hispanica
Chia seeds have been used as a medicinal food for centuries, but most Americans may know them best as the 1980's phenom "Chia Pet" planters. The seeds of Salvia hispanica are very rich in Omega-3 fatty acids, and are the richest vegetable source of ALA. Today Chia is being aggressively marketed as an "Ancient Aztec Superfood" under the trademark Salba, and sold for up to $6o per pound. You can however, enjoy the many health benefits of organically grown chia seed for as little as $9 per pound through reputable health food suppliers.
Salvia miltiorrhiza
Danshen, Asian red sage

Salvia, is from the Latin salvare, to save, or to be well. Sage was a sacred ceremonial herb of the Romans and was associated with immortality, and was also said to increase mental capacity. The Greek Theophrastus classified sage as a "coronary herbe", because it flushed disease from the body, easing any undue strain on the heart. In the middle ages, people drank sage tea to treat colds, fevers, liver trouble, epilepsy, memory loss and many other common ailments. Sage was held to be a major medical herb by the French, because of it's anti-bacterial properties.

Sage has also been used as a beauty aid. Early Greeks drank, applied or bathed in sage tea. Turkish women used sage as a natural hair dye for gray hair, and it still recommended for use in dark hair.


The early colonists considered sage almost as essential a spice as salt and pepper, and its use in the culinary arts of Thanksgiving have become an American tradition. Sage tea was a valuable remedy for colds, fevers in the harsh New England winters. John Josselyn noted sage in his diaries noted it in New England. (Colonial Dames of America. )


There is an old Arab belief that if your sage grows well you will live a long time. During the fourteenth century, three leaves a day were to be eaten to avoid the 'evil aire'. Sage was also a favorite of the Hungarian gypsies, they believed that it attracted good and dispelled evil.

Chia, Salvia hispanica was referred to as "Indian Running Food" by the Apache and Aztec warriors who sustained themselves while on conquests and hunting.